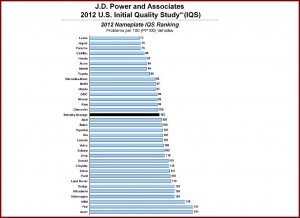 Owners of 2012 model vehicles surveyed after three months of use report that the overall initial quality for the U.S. auto industry averages 102 problems per hundred vehicles in 2012. This is an improvement of 5% from 2011. There were gains year-over-year in most areas of initial quality or IQS in the survey, according to the J.D. Power and Associates 2012 U.S. Initial Quality just released today at the Automotive Press Association in Detroit.

A growing problem area is lumped under the “audio, entertainment, and navigation” category where reported problems have increased by 8% from 2011. This continues a negative trend, with problems in this category increasing by 45% since 2006, while other categories have improved by 24% on average. Buyers aged 35 and under, who grew up with myriad consumer electronic devices are particularly vocal about the design failures of automotive electronics. This is a growing problem for the product development departments of automakers that are largely managed by older, white males.

Lexus is – not surprisingly – the highest-ranked nameplate in the industry for a second consecutive year, averaging 73 PP100. With 75 PP100 each, Jaguar and Porsche follow Lexus in a tie to for second. Jaguar posted the largest improvement in the study after a disastrous introduction of the new XJ model last year, reducing problems by 39 PP100, moving from the 20th position in 2011. Cadillac (80 PP100) and Honda (83 PP100) round out the top five.

Ford Motor – not surprisingly – with its quality killing My Ford Touch infotainment system was ranked 27th in the survey. Two years ago, Ford was fifth, but that was before the geeks took over product development apparently without adult supervision. Ford claims that the geeks now have fixes in the works that will not confuse or rather outrage its owners in a wait ‘til next year’ ploy.

Among the 21 model-level segment awards, Ford and Lexus receive three each. Ford earned awards for the Expedition, Mustang and Taurus. Lexus leads with the ES 350, LS and RX. Receiving two segment awards each are Infiniti (EX-Series, M-Series); Nissan (Frontier, Quest); and Toyota (Corolla, Yaris). The Porsche 911 ranks highest in the premium sporty segment and achieved 44 PP100, the lowest PP100 score since the study was redesigned in 2006.

“While in past years a handful of brands tended to collect numerous segment awards, 14 different brands receive segment awards in 2012—this is only the second time in the history of the study that so many different brands achieved award status,” said David Sargent, vice president of global automotive at J.D. Power and Associates. “This is a positive indication of how widespread high quality is among automakers, with most brands producing a number of models with exceptional quality levels.”

It also begs the question as to whether such quality surveys are sophisticated enough to provide meaningful information to consumers. Power, which earns substantial consulting fees from virtually all automakers, is redesigning its study next year for the first time since 2006 to allow for e-mail responses so that more data can be developed interactively with respondents. Whether this helps people shopping for cars remains to be seen.

The Initial Quality Study, now in its 26th year, allegedly serves as an industry benchmark for new-vehicle quality measured at 90 days of ownership. The study is used by manufacturers to help them design and build better models and by consumers to help them in their vehicle purchase decisions, according to Power.

Initial quality has been shown to be a leading indicator of what is more important long-term durability trends, which directly affects consumer purchase decisions. The study captures problems experienced by owners in two distinct categories: design-related problems and defects or malfunctions.