Sébastien Buemi, Kazuki Nakajima and Fernando Alonso, in the #8 TS050 HYBRID, defended their Le Mans crown after years of Toyota hard luck and also secured the drivers’ World Championship in the effort, winning by 16.9 secs from team-mates Mike Conway, Kamui Kobayashi and José María López in the #7.

In the last year before Le Mans class rules change yet again,  the Toyota curse re-appeared when the #7 blew what seemed a certain victory in front of an estimated 252,500 spectators.  For all provisional results and championship points, please click HERE .

On the 367th lap, with a lead of more than two minutes, telemetric data on the #7 car indicated a puncture and José pitted to replace the tire. A sensor issue resulted in the wrong tire being identified, meaning José left the pits still with a deflating tire. That necessitated a slow lap back to the pits when all four tires were changed, handing an unassailable lead to Kazuki in the #8.

The #7 crew had controlled – if not dominated – much of the race, having set the fastest-ever Le Mans race lap of 3 mins 17.297 secs. Other motorsport records were rewritten too –  Kazuki Najima became the first circuit-racing World Champion from Japan, and Fernando Alonso is the second driver to win four-wheel world titles in two different disciplines, having previously been crowned Formula 1 champion.

Viewers might remember that at Indy this year McLaren continued to demonstrate its lack of racing competence as two-time Formula 1 champion Fernando Alonso failed to qualify for the 2019 Indianapolis 500 in a McLaren Racing entry powered by Chevrolet’s 2.2-liter twin-turbocharged, direct-injection V6 IndyCar engine. The car lacked enough speed to make the show, much like McLaren’s disastrously slow Formula One entries this year. (Chevrolet to Power Fernando Alonso’s 2019 Indy 500 McLaren, Penske’s Pagenaud on Indy 500 Pole. McLaren Shut Out)

The LMP1 non-hybrids were unable to run with the Toyotas. Le Mans debutant Stoffel Vandoorne drove with Russian duo Vitaly Petrov and Mikhail Aleshin in the SMP Racing No. 11 car, with the trio successfully bringing the BR Engineering BR1 – AER car home in third position.  The sister No. 17 SMP car retired after 18 hours following an incident at the Porsche Curves.

Bruno Senna crossed the line fourth in the No. 1 Rebellion Racing Car, after losing time early in the race following a puncture. The sister No. 3 car finished fifth. ByKolles Racing Team and the No. 10 DragonSpeed Oreca-07 Gibson were hindered with reliability problems with both cars unable to finish.

The hometown (rather country) favorite was likely the Signatech Alpine Matmut team that won the LMP2 category of the 24 Hours of Le Mans for the third time in four years. With eight podium results in eight races, Nicolas Lapierre, André Negrão and Pierre Thiriet stole the second crown for Alpine in the FIA World Endurance Championship. The GRAFF-SO24– an Oreca – finshed second.

TDS Racing finished in third position, the French team taking solace in a podium position after their misfortune last year. Earlier in the week the new Alpine A110S.LM GTE-Pro was revealed as the future. Though the Alpine will continue in P2 next year as well.

Meanwhile, it was a race to forget for American-based team DragonSpeed with the #31 ORECA 07 Gibson car crashing out in the 16th hour with Pastor Maldonado at the wheel. 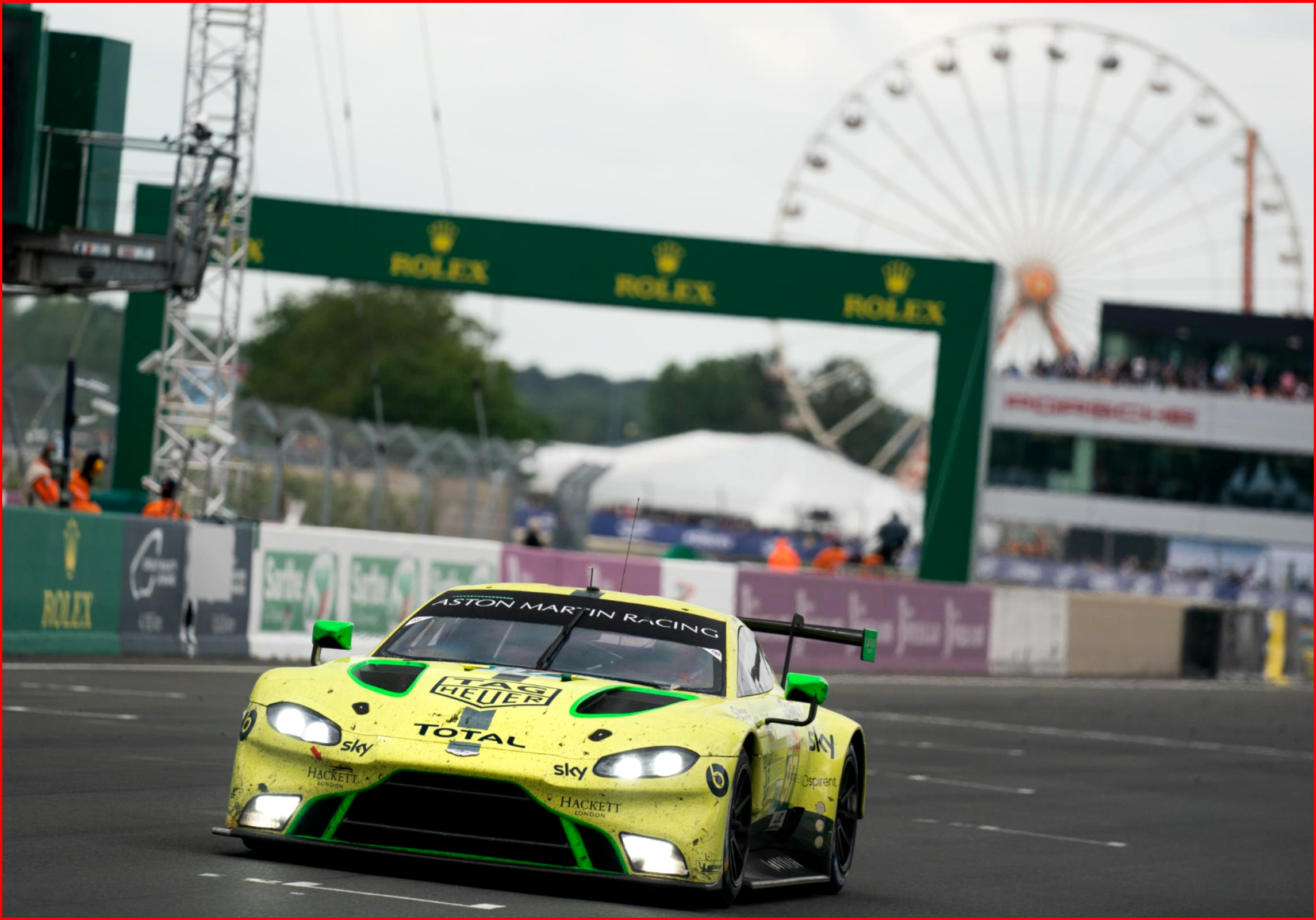 After delivering a setup that brought the necessary speed and stability to be on pace, the Aston-Martin team was forced to start the race with what it said was “a compromised, and largely untested, set-up” on each of its two GTE Pro entries.

Victory in the LM GTE Pro class went to the #51 Ferrari. The most humbling experience award went to Aston-Martin. The team took the pole position with Marco Sørensen (DEN) on Thursday night in the #95 car. (AutoInformed: Aston Martin On GTE Pole, Ford 2nd, Corvette 3rd at Le Mans ) The hope of a competitive showing was ruined  by track officials with a pre-race Balance of Performance (BOP) adjustment – aka at AutoInformed as ‘official meddling with a team not in favor.’

Nonetheless, the #97 car of Alex Lynn (GB), Maxime Martin (BEL) and Jonny Adam (GB) finished the race in 13th. The #95 Vantage GTE was more star crossed (or is that Ferrari-crossed?) during the night with driver Marco Sørensen involved in an incident at Indianapolis. Despite an estimated 40G side-impact, the Dane was able to walk away.

Things weren’t much better in Bavaria. The two BMW M8 GTEs finished in 11th and 14th positions in the LM GTE Pro class. The #82 BMW M8 GTE – driven by Jesse Krohn (FIN), António Félix da Costa (POR) and Augusto Farfus (BRA) – had started from fifth place but was off  pace as the race progressed, crossing the line in eleventh place after 335 laps. The #81 car, with Martin Tomczyk (GER), Nick Catsburg (NED) and Philipp Eng (AUT) at the wheel, finished in 14th position. Both cars lost time during the night and towards the end of the race after making repair stops to fix technical problems.

It was the fifth different GTE manufacturer to win Le Mans in five years and Ferrari’s first victory at La Sarthe since 2014.  In fact, the 87th running of Le Mans in this compelling class was a six-way manufacturer battle from start to finish – with Ferrari finishing ahead of all others after 24 hours of constant position changes. The win for AF Corse contrasted with the failure of the team’s sister prancing horse #71 to finish due to engine failure.

Porsche wrapped up the GT Manufacturers’ title in Spa and the drivers’ crown was either of the Porsche GT Team entries.  However, after a  commanding position for much of the first 16 hours, Porsche’s #91 911 RSR dropped out of contention when an exhaust problem forced a crushing 20-minute stop.

They weren’t the only manufacturer to suffer misfortune at Le Mans, with Aston Martin Racing –  announced alongside Toyota as a competitor in the new Hypercar category next year  – having a terrible time.  The #97 was the only one of the British marque’s three cars to finish.

Ford Chip Ganassi Team UK entered its last race in the WEC as part of a four-strong Ford GT entry, and ended finishing 4th, 5th, 6th and 7th after a race of mixed fortunes. They, together with Corvette Racing, were challenging through much of the race but it was not to be their year.  The American marque, which has won at Le Mans so many times in the past and competed in 50% of the WEC Super Season, was set to take another victory before bad luck hit the #63.

The LM GTE Am field once again saw plenty of action from start to finish but the top spot of the podium eventually went to Dempsey-Proton Racing’s No. 77 car trio made up of Christian Ried, Riccardo Pera and Matt Campbell.

The team also took 2nd in Amateur and earned the Drivers FIA Endurance Trophy for the class.  Egidio Perfetti, Jörg Bergmeister and Patrick Lindsey had a superbly consistent season to come through for championship honors and will return next season with two entries.

Clearwater Racing’s trio of Luis Perez-Companc, Matteo Cressoni and Matthew Griffin took the third podium spot in a Ferrari.  The Singaporean team enjoyed a close battle with the No. 98 of Aston Martin Racing and the No. 86 Gulf Racing team in the early stages of the race.