Pagenaud in a Honda Wins Inaugural Grand Prix of Indianapolis 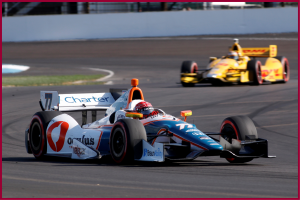 U.S. open wheel racing never recovered from Tony George’s stupidity when he established the IRL in a failed attempt at taking on the successful CART.

Simon Pagenaud became the fourth different IndyCar Series winner in four races Saturday at the Indianapolis Motor Speedway, as the Honda-powered driver took his first victory of 2014 at the inaugural Grand Prix of Indianapolis that was run on the road course in there that did not see racing – such as it is these days – start until the eighth lap of an 82 lap race. Four of the top ten cars were Honda powered, with the other six equipped with Chevrolet engines.  All were running the same Dallara chassis.

Fourth on the grid, Pagenaud avoided a green flag multi-car crash at the standing start that eliminated his Schmidt Peterson Motorsports teammate, Mikail Aleshin, and fellow Honda driver Carlos Munoz, when pole-qualifier Sebastian Saavedra stalled at the line. This resulted, yawn, in an eight-lap yellow light to begin what was supposed to be a race. If anyone was watching, the prolonged yellow caution lights no doubt sent viewers to the real action of Major League Baseball or the Stanley Cup playoffs.

Pagenaud has finished in the top five in all four Verizon IndyCar Series races this season. This has placed him third in the championship standings, just six points behind leader Will Power.

Indy car drivers and teams will now concentrate on the 98th running of the Indianapolis 500, with activities on the 2.5-mile oval beginning Sunday, the Opening Day of practice for the May 25th event. (Franchitti to Drive Camaro Z/28 Pace Car at Indy 500)

Indy of course once dominated open wheel racing and sports coverage during the month of May. That was until a devastating row prior to the 1996-racing season saw George family scion Tony, heir to the long-time owners of the track, aka brickyard, that held the Indy 500, take on the owners of the successful Championship Auto Racing League, which recognized the race but was successfully run, very successfully run by a different sanctioning body.

American open wheel racing has never recovered from Tony George’s greed and stupidity. Moreover, the once sold out Indy 500 now has many, many empty seats and minuscule TV ratings. It became so bad during the past few years that his own family fired him.

Ken Zino is an auto industry veteran with global experience in print, broadcast and electronic media. He has auto testing, marketing, public relations and communications expertise garnered while working in Asia, Europe and the U.S.
View all posts by Ken Zino →
This entry was posted in racing and tagged autoinformed, autoinformed.com, cart, irl, Ken Zino, tony george. Bookmark the permalink.