Passenger Car Sales Down in EU Again as Economy Struggles 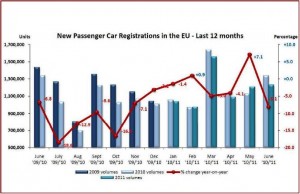 Sales declines continue to plague automakers in the common market as EU passenger car registrations dropped 8.1% in June to 1,233,298 units. ACEA, the auto industry trade group, reported this morning that during the first six months of 2011 a total of 7,120,499 new cars were registered, or 2.1% less than in the first half of last year. On an annual basis, sales have been declining in Europe for 3.5 years now

Auto manufacturing remains well below the peak of more than 16 million recorded in 2007 before the collapse of the global financial markets caused the ongoing Great Recession.

However some winners are emerging. Volkswagen Group remains the powerhouse in Europe with 23% share year-to-date of the EU and European Free Trade Areas. BMW group also posted strong double digit gains, as did Nissan, although both are on relatively small basis. The same could be said for Hyundai and Kia, which now have combines sales of more than 345,000 units year-to-date, compared to Volvo’s 138,000.

The rise of the Koreans is one reason Ford of Europe CEO, Stephen Odell, has called for the creation of a comprehensive industrial policy across the European Union. Odell also opposes a proposed Korean trade agreement in Europe, which in a different form is also controversial in the U.S. (See Ford of Europe CEO Stephen O’Dell Calls for a Comprehensive Industrial Policy and Rejection of Korean FTA)

The European subsidiaries of the Detroit Two – General Motors and Ford, basically stayed even but continue to a concern to shareholders because of the drag European operations puts on earnings at both companies. Chrysler, now controlled by Italian Fiat, dropped 31%, but that was on a previous 2010 base of only 22,000 units.

Volkswagen Group retained its dominant market share for the semester at 22.8% or 1.7 million vehicles. VW was followed by these shares:

Unlike the U.S. a strong national component among buyers remains in play in Europe with cars from makers headquartered in the largest markets – Germany, France, United Kingdom, Italy and Spain, respectively – selling in large numbers.

Combined with government encouraged export activity, this makes the German automakers the automotive economic powers they are, even though German automakers pay the highest wages by far to autoworkers. German industrial policy also makes it very difficult to close plants and move jobs out of Germany.