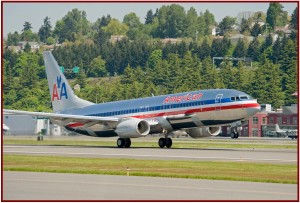 PBGC receives no taxpayer dollars, it claims. This is misleading since the government requires participation by corporations. Questions have been raised about the agency's competencies, most recently by the Inspector General reviewing its handing of the United Airlines bankruptcy.

The Pension Benefit Guaranty Corporation has called out what it says is misleading statements to American Airlines employees by its management about their pension plans under a bankruptcy reorganization.

“American Airlines is telling their workers and retirees not to worry, but they should,” said J. Jioni Palmer, PBGC’s director of communications. A termination would also weaken the financial health of PBGC, which has a record $26 billion deficit as a result of failed plans the agency has already assumed. Ultimately, unless PBGC raises its less than adequate rates and closes the deficit, it’s likely taxpayers will ultimately foot the bill.

The disparity in premiums is at the core of the American Airlines dispute. American has paid a total of $260 million over 37 years. American is presently seeking to terminate its four pension plans, adding some $9 billion to PBGC’s deficit – after receiving some one billion dollars in pension funding relief from Congress, which allowed it to defer payments.

A recent letter to employees from American Airlines management downplayed the serious consequences of what could happen if the company terminated its pension plans, Palmer claimed. The letter ignored that PBGC doesn’t insure retiree health benefits, which are usually canceled when companies terminate pension plans.

The American letter also downplayed the pension cuts that would occur if American’s plans are terminated and PBGC benefits are substituted. Although the figure appears nowhere in the management letter, the airline itself estimates that some 13,000 current or retired employees will have their pensions cut.

American’s recent statements, through its lead bankruptcy counsel and in employee communications, have signaled the airline’s intent to dump its retirement obligations on the PBGC.

“American said nothing’s been decided yet, but didn’t even bother to pretend that it was trying to preserve its employees’ pensions,” Palmer said.

Since the airline sought Chapter 11 protection in November of 2011, the agency has been working to try to preserve American’s pension plans. PBGC has repeatedly stated that the airline must be preserved, but that if it can do so while preserving its plans, that would be better both for PBGC and American’s employees. PBGC noted that other airlines had reorganized successfully without terminating pension plans.

American’s main competitors, United and Delta have used bankruptcy and mergers with Continental and Northwest respectively, to trim costs as fuel prices have soared. Even though American has obtained contract concessions from its unions, the airline claims its costs still remain far higher than competitors.