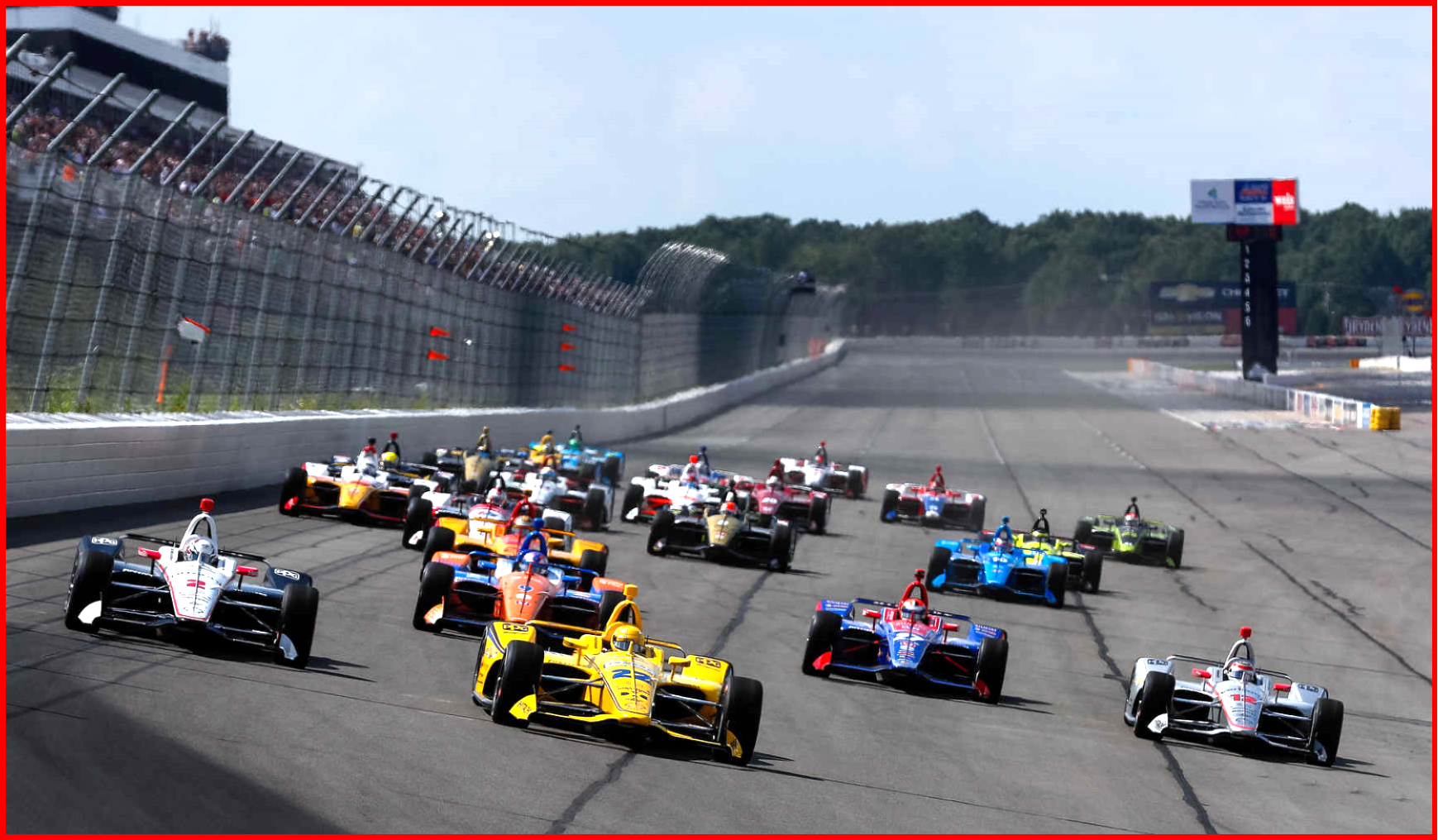 Will Power, driver of the #12 Verizon Team Penske Chevrolet IndyCar V6 won a rain-shortened NTT IndyCar Series ABC Supply 500 at Pocono Raceway in Long Pond, Pennsylvania yesterday. The victory marked the 13th consecutive season that Power has won at least one race, a streak that dates to the 2007 Champ Car World Series season.

It was only a couple of miles into what was supposed to be a 500-mile race at the Pocono tri-oval, when a bonehead move by Takuma Sato eliminated five contenders. The restart 45 minutes later pretty much determined the outcome in a thunderstorm shortened race that purported to be professional racing. Thus far Sato has not been penalized for causing a life-threatening accident.

Rossi said later : “Obviously I didn’t get a good start, and that’s on me, but we were three-wide with Ryan on the inside, I was in the middle with Takuma on the outside. I can’t even believe to understand after last year how Takuma thinks any sort of driving like that is acceptable,” he said… “To turn across two cars at that speed at that corner, in a 500-mile race is disgraceful and upsetting. It might have cost me this championship.”

Hunter-Reay agreed his team-mate. “My view is that it was ridiculous,” he declared.

Ultimately, Will Power (No. 12 Verizon Chevrolet) owned the lead with 128 of 200 laps complete on the 2.5-mile “Tricky Triangle” before the race under red-flag conditions and gave him his first win of the year. Joining Power on the podium were championship contenders Scott Dixon (No. 9 PNC Bank Chip Ganassi Racing Honda) and Simon Pagenaud (No. 22 Penske Truck Rental Chevrolet), who were second and third, respectively. (ABC Supply 500 unofficial results)

In the top five were Santino Ferrucci (No. 19 Cly-Del Manufacturing Honda), who finished a career-best fourth, and championship leader Josef Newgarden (No. 2 Hitachi Team Penske Chevrolet), who was fifth.

Newgarden extended his championship points lead over Alexander Rossi (No.28 MilitaryToMotorsports.com Honda), who finished 18th after getting mugged in the opening-lap multi-car incident, to 35 points, 535-500. Pagenaud is third with 495 points (-40) and Dixon fourth at 483 (-52).

The NTT IndyCar Series moves on to Madison, Ill., for next Saturday night’s Bommarito Automotive Group 500 at World Wide Technology Raceway at Gateway. Let’s hope it’s racing not another Sato trashing. A good start would be making Sato sit out the balance of the season.

Ken Zino is an auto industry veteran with global experience in print, broadcast and electronic media. He has auto testing, marketing, public relations and communications expertise garnered while working in Asia, Europe and the U.S.
View all posts by Ken Zino →
This entry was posted in racing and tagged auto industry commentary, autoinformed.com, automotive blog, indycar, Ken Zino, Pocono. Bookmark the permalink.