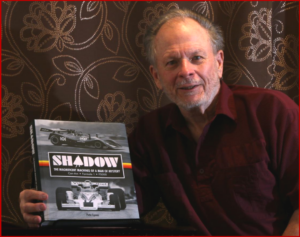 Forget Covid: let Pete bring you back trackside to the roar of the engines and the smell of burnt rubber as outsize egos challenge each other with incredible outsize machines. Click to Enlarge.

Beware of book reviews by friends of the author. That said, Pete Lyons’s Shadow: The Magnificent Machines of a Man of Mystery has won the Royal Automobile Club’s Specialist Motoring Book of the Year award for 2020. This easy going tome – published by Evro Publishing, with 464 pages and 600 illustrations – tells for the first time the story of the Shadow racing team, which was active for 11 seasons starting in 1970. (The RAC presentation may be viewed here)

Don Nichols the team principal was secretive by nature. Nichols, a D-Day paratrooper, Army counter-intelligence officer and “controversial entrepreneur” created a racing marque that was the only US-based team to win a Can-Am championship.  It was also one of only three to score a victory in Formula One. The team competed against and beat teams and cars from Dan Gurney and Roger Penske, among others. Pete Lyons fills in the shadows with his compelling account of the innovative racing cars and world-class teams Don Nichols created.

Lyons know whereof he speaks. Pete draws on sizeable first-hand experience: he was present for Shadow’s two big débuts, in Can-Am at St Jovite in Canada (1970) and in Formula 1 at Kyalami in South Africa (1973). His numerous interviews for the book included six days with Nichols himself not long before ‘Shadowman’ died in 2017.

“Ever since October 1971, I’ve believed that motorsport could bring me no more exciting occasion than the rocket ride around Riverside that Can-Am champion Peter Revson gave me in his stupefyingly fast McLaren M8F. As of October 2020, Revvie has a rival, says Pete Lyons.

“This honor so generously bestowed on Evro Publishing and I has sent my personal tach needle perilously near the red. My deepest gratitude to the Royal Automobile Club, as well as to all who helped to tell the story of Don Nichols and his compellingly Quixotic racing team. Putting it together has been a joy,” Lyons said. If you have racing in your blood this is a must read.

Pete notes that Nichols for years wanted to do his own book along with a parallel one on his military career. When it didn’t happen as it should have years ago, Lyons said  that a confluence of events made it possible to spend days with Nichols in Salinas, CA (outside of Monterey) where he took Lyons and his wife through his notebooks. Ah, as anyone who has wrested with histories, memoirs or even their own memories of events long past, Nichols told different versions of  some events over the course of days. Pete, an admitted hunter, said he enjoyed every minute sorting it all out. You will too reading Pete, a polite man with the quiet air of a man of accomplishments who competes only with himself and his last book.

This is the fifth time an Evro book has won a Royal Automobile Club Motoring Book of the Year award. In the inaugural year of these awards, 2014, the honor went to Evro’s very first book, John Surtees: My Incredible Life on Two and Four Wheels. The 2016 winner was Brian Redman’s memoir Daring Drivers, Deadly Tracks. The Specialist award was given to Karl Ludvigsen’s Reid Railton: Man of Speed in 2018 and to Simon Taylor’s John, George and the HWMs in 2019.