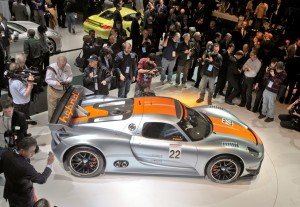 Additional electrical power is available for around eight seconds when the system is fully charged.

Porsche AG returned to the Detroit Auto Show for the first time in several years with a delicious 918 RSR single-seat hybrid racing car. The 918 RSR uses a flywheel mounted on the passenger side to capture some of the energy normally wasted by converting kinetic energy to heat under braking.

The Porsche 918 RSR unveiled derives from the technology of 911 GT3 R hybrid that raced last year on the Nuerburgring Nordschleife circuit, during the American Le Mans Series races at Road Atlanta/USA and the ILMC run in China’s Zhuhai.

The 918 RSR is basically a coupe variant of 918 Spyder (convertible), a plug-in hybrid concept based loosely on the production Boxster sports car, which made its debut at the 2010 Geneva Motor Show.

The 918 Spyder has since been approved for production as a $500,000+ limited production car. It’s the latest indication that when Porsche shows a concept, it actually means to develop it after press reveals, auto shows and publicity tours, unlike some other automakers. 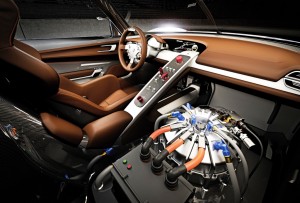 Large amounts of energy are being changed form to form - note the size of the cables to handle the load.

So this 918 is a hybrid, so to speak, of a hybrid race car. It appears destined for sports car racing, with the 24 hours of Le Mans a likely venue some June in the future, if – big if – the car can be made to fit into revised regulations that eliminate the unlimited prototype class where the 918 RSR could have run in the past. Given Porsche’s fabled history at Le Mans where it’s been racing on the Sarthe circuit since 1951 — 16 overall victories, and numerous class wins — I suspect the fix is ultimately in.

The 918 RSR is an advanced technological vehicle that uses a carbon fiber-reinforced plastic (CFRP) monocoque chassis to support a V8 engine (563 horsepower at 10,300 rpm) mounted amid with electric motors on the two front wheels adding a total of 150 kW. Giving the driver to 767 horsepower to use. This additional electric power, which is generated during braking, is stored in a flywheel accumulator mounted on the passenger side of the sleek coupe.

This flywheel accumulator is an electric motor whose rotor rotates at up to 36,000 rpm to store kinetic energy. Charging occurs when the two electric motors on the front axle reverse their function during braking and operate as generators. At the push of a button, (Illegal at Le Mans this year) the pilot is able to call up the energy stored in the charged flywheel accumulator and use it during acceleration or overtaking maneuvers. The flywheel is braked electro-magnetically to supply up to 2 x 75 kW, (150 kW), from its kinetic energy to the two electric motors on the front axle. 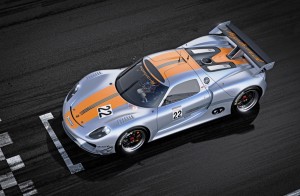 This record stood for 39 years until 2010 when Audi surpassed it.