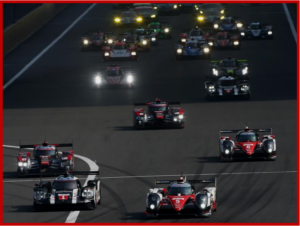 At the six-hour WEC race in Shanghai yesterday Porsche 919 Hybrids finished first and fourth, thereby capturing the manufacturer’s title for the second straight year, a record in front of a crowd of 55,000. The driver trios of Timo Bernhard (DE)/Brendon Hartley (NZ)/Mark Webber (AU) and Romain Dumas (FR)/Neel Jani (CH)/Marc Lieb (DE) finished first and fourth – worth 38 points. It was Porsche’s sixth race win this season with only Bahrain remaining in the nine-round season. Now with 301 points in total, it is mathematically impossible for the hybrids from Audi (222) or Toyota (207)  to surpass Porsche.

The winner of the race was never in serious doubt, but the battle for second position raged throughout between the two Toyota TS050 Hybrid entries and the #2 Porsche 919 Hybrid. The Toyota #6 TS050 of Stéphane Sarrazin, Mike Conway and Kamui Kobayashi endured two cut tires, but despite the bad luck managed to finish second. This keeps them in the fight for the drivers’ World Championship, having closed the gap on the #2 Porsche to 17 points with 26 still available in the final race at Bahrain on 19 November.

Last year’s drivers’ title went to Porsche’s Bernhard/Hartley/Webber in a thrilling finale in Bahrain. With one race to go, the current championship leaders are this year’s Le Mans winners Dumas/Jani/Lieb of Porsche.

Toyota also took third place with Anthony Davidson, Sébastien Buemi and Kazuki Nakajima, their first podium of the season. This keeps the team in the fight for runner-up in the manufacturers’ championship. Toyota is now 15 points behind Audi with a maximum of 44 still available.

Audi, having just announced it is abandoning WEC after Bahrain, had a dispiriting weekend, which probably represents the mood of the soon to be defunct team. Despite diverse problems, the six drivers and the team scored 18 points. Thus, Audi defended second place in the manufacturers’ standings, before the finale to be held in Bahrain in two weeks’ time. Initially, #8 driven by Lucas di Grassi/Loïc Duval/Oliver Jarvis (BR/F/GB) was among the front runners. One hour into the race, di Grassi, with a gap of 6.4 seconds, was in second. During the first pit stop, however, the team noted the fuel tank was absorbing clearly less fuel than planned, reducing the subsequent pit stop intervals until the mechanics fixed the defect during a service. Number 8, however, ultimately had to settle for fifth place.

The #7 car of Marcel Fässler/André Lotterer/Benoît Tréluyer (CH/D/F) was initially running in sixth and advanced to fifth place about halfway through the race. However, shortly after the race’s midpoint the two Audis hit each other. While lapping slower participants, the race cars of Oliver Jarvis and Benoît Tréluyer touched.

The contact damaged the right-hand side pod of the #7 car at the compressed air connector. Thus, the air jack could no longer be operated at the next pit stop. Replacing the damaged components cost the team more than 25 minutes. With a 14-lap deficit, Fässler resumed the race in 16th place, subsequently making up ground to see the checkered flag in position six.

First place went to #26 G-Drive Racing in an Oreca 05- Nissan. The car was extremely fast. In fact the top six teams or so of the LMP2 class would challenge the LMP1 cars – if it weren’t for rule restrictions designed to protect LMP1 cars. Second and third went to a pair of Ligier JS P2 cars with Nissan engines:  Giovinazzi/Blomqvist/Gelael; and Gonzalez/Albuquerque/Senna, respectively.

GTE Pro saw Ford 1-2 as the #67 Ford Ganassi Team UK car of Andy Priaulx and Harry Tincknell took a dominant win ahead of stablemates Olivier Pla and Stefan Mucke. It was the second consecutive 1-2 for the Blue Oval. Third went to the #51 AF Corse with Bruni and Calado driving the Ferrari 488 GTE.

The KCMG winning racer from Weissach is based on the seventh generation 911 sports car. Wolf Henzler, who had a Ferrari ahead of him in second under increasing pressure in the closing phase of the race. When both cars became embroiled in a collision involving a prototype in the last lap, the Porsche factory driver took third.

Ken Zino is an auto industry veteran with global experience in print, broadcast and electronic media. He has auto testing, marketing, public relations and communications expertise garnered while working in Asia, Europe and the U.S.
View all posts by Ken Zino →
This entry was posted in racing and tagged autoinformed, autoinformed.com, endurance racing, Ken Zino, Shanghai, wec. Bookmark the permalink.