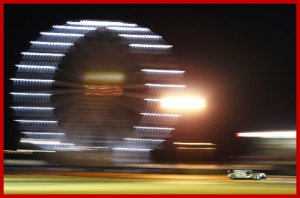 The 919 has a 2-liter V4 turbocharged gas engine with an output of more than 500 horsepower going to the rear axle. An electric motor with over 400 hp drives the front wheels. It gets electricity from two energy recovery systems. A liquid-cooled lithium-ion battery temporarily stores converted braking energy from the front axle and converted thermodynamic energy from the exhaust.

Porsche took a decisive one-two finish for its first overall win in the LMP1 class at Le Mans 2015. The VW group owned company now has 17 Le Mans wins, a record at the circuit that occurred after  only its second year back from a 16-year hiatus. Drivers Earl Bamber (NZ), Nico Hülkenberg (GER) and Nick Tandy (GB) won the trophy in their Porsche 919 Hybrid with 395 laps of the track. Timo Bernhard (GER), Brendon Hartley (NZ) and Mark Webber (AUS) in the sister car finished in second. Romain Dumas (FR), Neel Jani (CH) and Marc Lieb (GER) placed a third Porsche 919 Hybrid in fifth.

Victory in the 83rd running of Le Mans was decided between Audi and Porsche on Sunday morning when things were wrong for Audi. This prevented it from  taking its 14 victory at the La Sarthe circuit in front of 263,500 fans. Porsche basically led from the ninth hour on.

The previous Porsche Le Mans win, also a one-two, came back in 1998 when Allan McNish (GBR), Laurent Aiello (FRA) and Stéphane Ortelli (MC) finished first in their Porsche GT1. The victories in France over the last weekend came 45 years after Porsche’s first overall win there. This ended VW Group member Audi’s recent domination of the world’s most famous endurance race.

All three Audi R18 e-tron quattro cars were fast but when the sun rose, troubles ensued. André Lotterer, Marcel Fässler and Benoît Tréluyer, despite an early puncture were battling for victory when a large section of the engine hood came off on their R18. The repair took 6.56 minutes, but the two lost laps would not be made up and they settled for third. There was some consolation here since during all 17 Le Mans runs at least one Audi team has been on the podium. Moreover, André Lotterer produced the fastest race lap in 3:17.476 on lap 337. (This is the fourth time that Lotterer has run fastest at Le Mans, and the third in succession, 2011-2013-2014-2015).

The Audi R18 e-tron quattro of Filipe Albuquerque (P), Marco Bonanomi (I) and LMP1 rookie René Rast (D) remained in striking distance of the Porsches and took the lead several times. They seemed to have the best chance for victory. Hybrid system problems saw the Audi trio drop behind the two best Porsche cars on Sunday morning. The front left driveshaft had to be changed three hours before race end, taking17 minutes. This resulted in seventh place in the overall results.

Audi drivers Lucas di Grassi (BR), Loïc Duval (F) and Oliver Jarvis (GB) lost their chance for victory due to a spectacular accident. Duval, in the Indianapolis track section heavily hit the guardrails as he was getting out of the way of several slower vehicles – a perennial Le Mans challenge – and was hit on the rear by a GTE car, at the end of the third hour. Twenty-one hours later, they took fourth place.

The Japanese makers – Toyota and Nissan in it rookie year had mixed results – 8 and 9 laps back for Toyota. The two Nissans that endured were 37 laps down at race end. Their different approaches to car design are striking, with the front-wheel drive configuration of Nissan a thus far failed experiment with its GT-R LM NISMO teams.

Nissan tried to spin the results by claiming that the sole racing goal for the three cars entered was to finish. The #22 Nissan GT-R LM NISMO of Harry Tincknell (GB), Michael Krumm (GER) and Alex Buncombe (GB) took the checkered flag at 15:00 on Sunday afternoon – 37 laps behind the winning Porsche.

Frustration resulted for Toyota since last year it was the strongest maker, leading the race for 17 hours before losing because an overheated electrical cable caused a fire in the car. This year, Toyotas were reliable, but slow. The #2 Toyota TS040 Hybrid of Alex Wurz, Stéphane Sarrazin and Mike Conway finished in sixth place, with Anthony Davidson, Sébastien Buemi and Kazuki Nakajima in eighth.

Only one incident of major significance affected the team occurred in the fifth hour, when Anthony Davidson clashed with a GT car, damaging the front right. That caused handling problems and a further accident followed soon after. Quick work by the pit crew saw changing front and rear bodywork, plus a new left rear suspension, with the #1 car losing 13 minutes and rejoining five laps behind the leader.

The two Toyota TS040 Hybrids ran consistently and reliably but fell short of the pace of their rivals having improved lap times by only 1 second from the fastest race lap of 2014. This was not enough to challenge and “led to a solitary race for both cars,” according to Toyota in a candid statement.