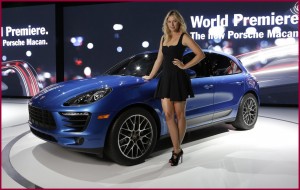 The Porsche Macan SUV is off-road capable, if anyone buying one cares.

Porsche AG during Q1 2017 delivered ~60,000 vehicles globally. This means the sedan and truck maker – enmired in the Volkswagen dieselgate scandal because of its stock holdings in VW – exceeded the number of Porsche’s delivered in Q1 of 2016 by ~7%.

This is Porsche’s best first quarter in its history. Growth came from China, the company’s home market of Germany, supported by the Panamera and Macan model lines that had double-digit growth.

During Q1 of 2017, China was once again the strongest individual market. With a total of 18,126 vehicles delivered, the Chinese market exceeded last year’s result by 10%. In Europe, the company delivered 19,084 units, an increase of 7%. A total of 7,160 vehicles were delivered to customers in Germany.

In addition to the ongoing success of the 911, of which nearly 1,600 vehicles were delivered in Germany, the new Panamera that was introduced at the end of 2016 was responsible for this significant growth. Porsche also continued its sales momentum in the U.S., delivering 12,718 vehicles, an increase of 4%.

Ken Zino is an auto industry veteran with global experience in print, broadcast and electronic media. He has auto testing, marketing, public relations and communications expertise garnered while working in Asia, Europe and the U.S.
View all posts by Kenneth Zino →
This entry was posted in marketing, results, sales and tagged autoinformed, autoinformed.com, Ken Zino, porsche china, Porsche Q1 results. Bookmark the permalink.