Porsche Q3 in Black at €437 Million Because of VW 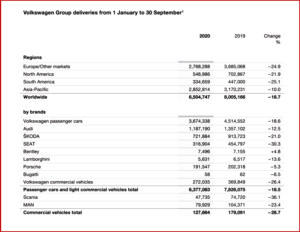 Porsche SE’s positive result after tax basically comes from the profit from an investment accounted for at equity in Volkswagen AG of €505 million (prior-year period: €3.58 billion. Porsche Se is the largest holder of VW common stock). The business of the Volkswagen Group was affected by the Covid-19 pandemic in the first nine months of 2020 but made a recovery in the third quarter. Nonetheless both groups remain in difficult if not precarious financial positions.

Net liquidity of the Porsche SE Group came to €492 million euro as of 30 September 2020 (31 December 2019: €553 million). Due to the record date, this figure did not include either the dividend inflow to Porsche SE from Volkswagen AG of €756 million or the dividend distribution to the shareholders of Porsche SE of €676 million. Both cash flows occurred in October 2020. AutoInformed at the time questioned the wisdom of the distributions given the ongoing Covid pandemic. (Volkswagen Group Closes 2019 Books)

The forecast of the group net liquidity of Porsche SE remains unchanged. Without taking additional investments into account, it lies in a corridor of €0.4 billion to €0.9 billion as of 31 December 2020.

Ken Zino is an auto industry veteran with global experience in print, broadcast and electronic media. He has auto testing, marketing, public relations and communications expertise garnered while working in Asia, Europe and the U.S.
View all posts by Ken Zino →
This entry was posted in economy, financial results and tagged auto industry commentary, autoinformed, autoinformed.com, Ken Zino, Porsche SE. Bookmark the permalink.