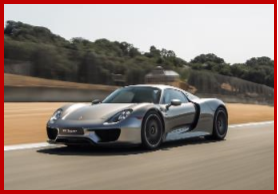 The Porsche Spyder  hybrid – 887 total horsepower – set a lap record for street-legal vehicles on the North Loop of the Nürburgring at 6 minutes 57 seconds – a record still unequaled.

In a NHTSA report just released, Porsche said it is recalling its $845,000 Spyder hybrid for engine fires. As many as 225 of the mid-engine sports cars can be affected by a wiring harness for the left-rear radiator fan that rubs against a carbon fiber engine heat shield. This leads to chaffing and a short circuit, thereby increasing the risk of a fire.

Porsche said the root cause was in the production process, which means this will likely be a global recall for possibly all of the 918 of  the 918 Spyder models produced starting for the 2014 model year. Dealers will inspect the harness and provide additional tie-downs for it, if necessary.

Owners may contact Porsche customer service at 1-800-767-7243. Porsche’s number for this recall is AF05. Note: The wiring harness could short and result in a fire even when the vehicle is unattended. As a precaution, owners are advised to park outside until the car is fixed.

Last week, the 918 Spyder after 21 months of production, saw the final Porsche 918 Spyder came off the assembly line in Stuttgart-Zuffenhausen right on schedule.

Ken Zino is an auto industry veteran with global experience in print, broadcast and electronic media. He has auto testing, marketing, public relations and communications expertise garnered while working in Asia, Europe and the U.S.
View all posts by Kenneth Zino →
This entry was posted in recalls, safety and tagged autoinformed, autoinformed.com, Ken Zino, recalls. Bookmark the permalink.