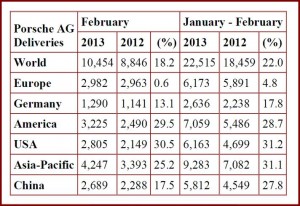 Another strong month for VW’s Porsche.

Porsche sold 10,454 sold new vehicles in February 2013, an increase of 18.2% in comparison to the same month last year. The Porsche model most in demand worldwide was the Cayenne SUV once again at 5,637. Almost 2,000 911 models were sold. The former sports car maker, now luxury goods purveyor fully owned by the Volkswagen Group, saw particularly strong sales in the U.S. at 3,225, a 31% increase in its largest market.

Year-to-date Porsche sales at 22,515 are up 22% globally. VW Group is closing in on GM as the world’s second largest automaker and wants to be Number One in global auto sales by 2018. (Read AutoInformed on Toyota Ousts GM from Global Auto Sales Leadership. VW Third and VW Group Ties GM for Largest Maker in China as January Sales Soar)

“Porsche was successful worldwide in February again,” said Bernhard Maier, Member of the Executive Board Sales and Marketing of Porsche AG. “We anticipate more stimuli from our ongoing product offensive in the next few months – at the moment with the pan-European launch of the new Cayman and the showing of the new 911 GT3 at the Geneva Motor Show.”