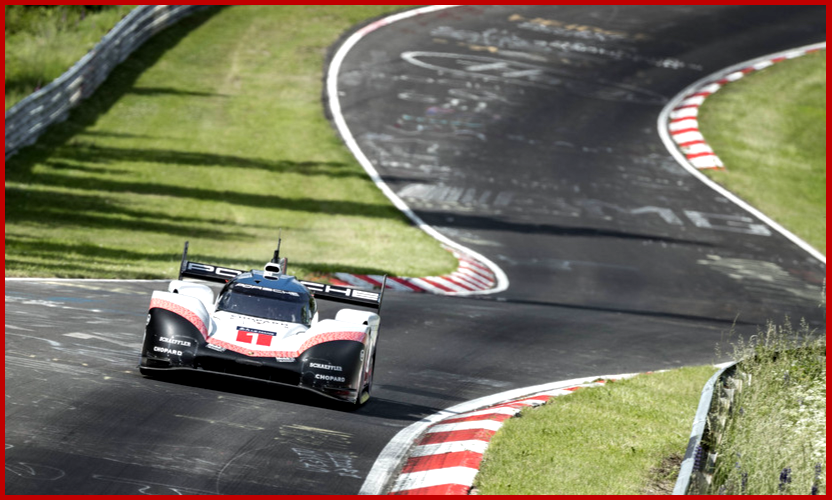 Evo is a recycled rolling publicity stunt of an outlaw car, albeit a tour de force of Porsche Racing’s formidable design, engineering and driving strengths.

Timo Bernhard (D) lapped the 20.832-kilometer (12.94 miles) Nürburgring Nordschleife – aka Green Hell – race circuit in 5 minutes and 19.55 seconds. This is an average speed of 233.8 km/h (145.3 mph) on what is one of the world’s toughest circuits according to drivers, engineers and sports car cognoscenti. Driving the Porsche 919 Hybrid Evo, Bernhard beat the previous lap record, set by Stefan Bellof, by 51.58 seconds. His drive alternated between the all-out attack and caution that is mandatory on this circuit. Skillfully he found the balance.

For 35 racing years (for a driver you could multiply by 7, it’s a Greyhound’s life) and 31 days Bellof’s 6:11.13 minutes record stood alone. The German driver from Gießen, who died at Spa-Francorchamps in 1985, might have been the biggest racing talent of his time, perhaps anytime. He drove his way into the record book on May 28 in 1983 at the wheel of a 620 horsepower Rothmans Porsche 956 C during practice for the 1000-kilometer World Endurance Cup (WEC) sports car race. His average speed was also more than 200 km/h.

Timo Bernhard is no un-scrubbed tire. A five-time overall winner of the Nürburgring 24-hours, two-time outright winner of the Le Mans 24-hours and reigning World Endurance Champion with the Porsche 919 Hybrid. The legal racing car  was retired in part because of balance sheet havoc of the ongoing VW Group dieselgate scandal.

The Porsche 919 Hybrid Evo is a development of the thoroughbred Le Mans prototype with which Porsche won the Le Mans 24-hour race in 2015, 2016 and 2017, as well as the FIA World Endurance Championship three times in a row –  both manufacturers’ and drivers’ titles respectively. (Porsche to Show New 919 Hybrid for Le Mans at Monza)

Timo Bernhard is no un-scrubbed tire as the five-time overall winner of the Nürburgring 24-hours, two-time outright winner of the Le Mans 24-hours and reigning World Endurance Champion with the Porsche 919 Hybrid, that was retired in part because of the balance sheet havoc of the ongoing VW Group dieselgate scandal. This left the LMP1 class to Toyota, which won LeMans this year. I can hear the weeping in the Black Forest. (Nürburgring – Can Porsche Le Mans Luck Continue?,  Audi Dumps World Endurance Cup Racing and Le Mans after 18 Years of Success for Boring Formula E?)

Bernard noted the aerodynamic downforce pressing  at sections where “he never imagined you can stay on full throttle.” Ironic that such extreme aerodynamics will not be possible under new rules that are under negotiation for next season. These rules create a yet unnamed new top class that is ill-defined but self-evidently needed to assure sports car racing remains a sport rather than turn into NASCAR-style pro-wrestling where decals allegedly make the difference on a common spec car. One-quarter the cost of fielding a current two-car team is promised. Hybrid propulsion will be mandatory, which nicely coincides with where regulations and product development are taking the larger automotive universe.

However, if anyone thinks that racing in its top classes can be inexpensive, I have a bridge to sell you in Brooklyn; one where I used to test car for harmonic induced noise.

On this side of the Atlantic, IMSA’s response shows that wrangling over the new rules is just on the formation lap: “This is a work in progress. And while a lot of progress has been made there is much still to be done. We look forward to continuing to work closely in the coming months, collaborating with the ACO and FIA and our existing prototype partners, to confirm a viable cost structure for competing in the Prototype class. IMSA continues to be focused on providing attractive opportunities for manufacturers and teams to compete in the IMSA WeatherTech Sports Car Championship.”

Ah yes – promotions and taunting from the ‘Merican, NASCAR owned sanctioning body that is the only show running in professional sports car racing except for the SCCA, which continues to  nurture club racing in the U.S.

It will be great fun to watch all the British, French, Germans, Italians and Americans wrangle the rules in search for an unfair advantage – unless you’re their sponsor with tens of millions or more on the pavement in whatever currency mountain you are strip mining. All I modestly hope for is real racing among more or less equal equipment where drivers, strategy and weather play in the outcome. (Le Mans 2018 – Wrecks, Pit Stops, Safety Car – Pick Winners. Toyota Finally Wins P1 After Years of Breakdowns with a Record 388 Laps.) 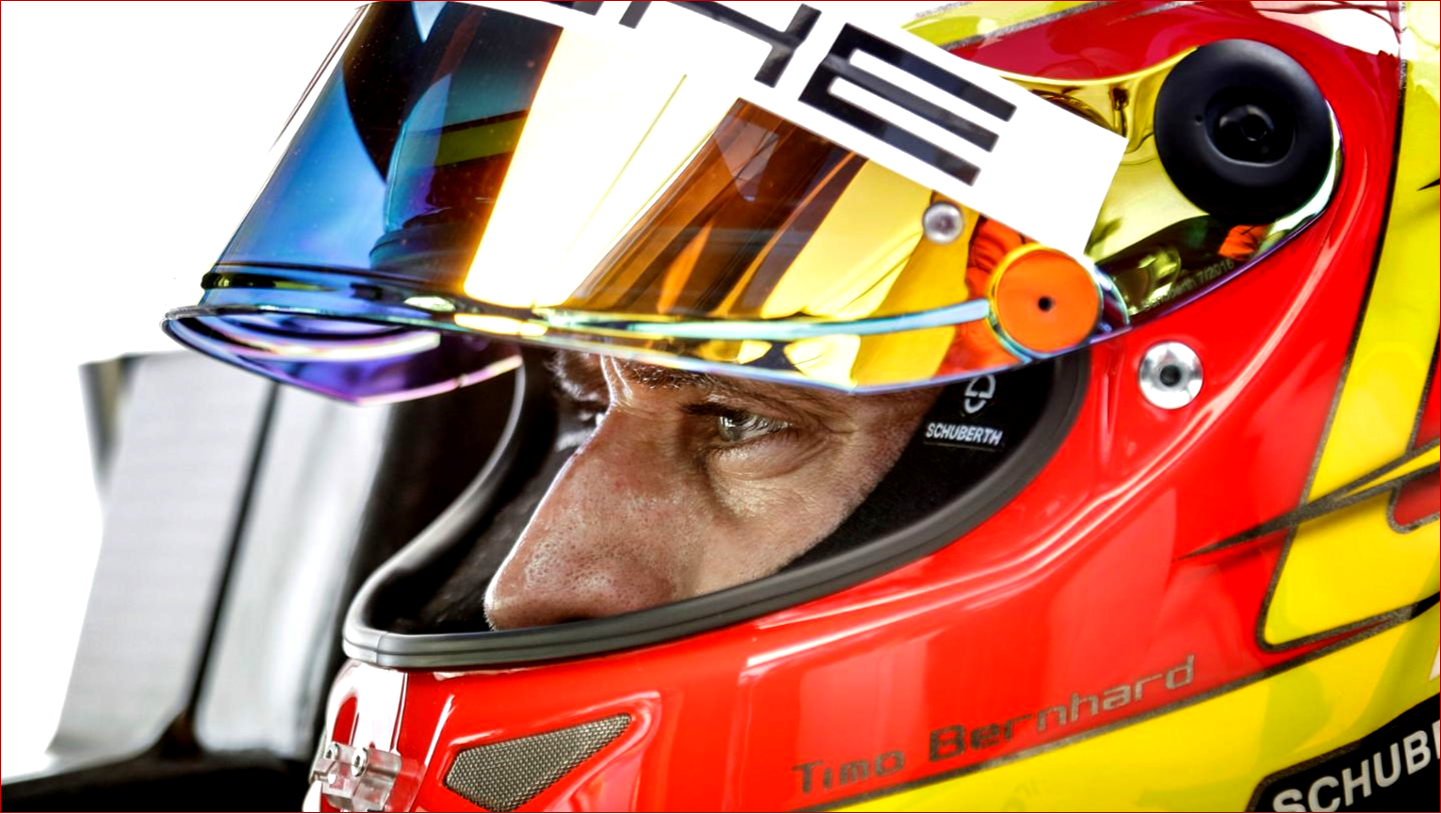 Bernard is an admirer of Stefan Bellof. In 2015, on the thirtieth anniversary of Bellof’s deadly accident, Timo raced at the Spa-Francorchamps 6-hour race of the FIA World Endurance Championship with a helmet carrying the black-red-gold design of the 1980s star.

“For me Stefan Bellof is and remains a giant,” Timo said. “Today my respect for his achievement with the technology available back then increased even more,” said the 37-year old from Bruchmühlbach-Miesau in the German region of Saarpfalz.”

The latest success is the second track record for the Porsche 919 Hybrid Evo: On 9 April 2018 in Spa, the rule-busting Evolution marketing car of the three-times Le Mans winner lapped faster than a Formula One car with Neel Jani at the wheel. The 34-year old Porsche works driver from Switzerland – a Le Mans outright winner and Endurance World Champion of 2016 – set a lap of 1:41,770 minutes on the 7.004 kilometer (4.35 mile) Grand Prix circuit in the Belgian Ardennes mountains. He topped the previous track record, set by Lewis Hamilton in 2017 qualifying, by 0.783 seconds, when the British Mercedes driver took pole position for the Belgian Grand Prix in 1:42.553 minutes.

The Evo version of the Porsche 919 Hybrid is rid of former restrictions that were hitherto determined by the regulations. As such it is a rolling publicity stunt, albeit a tour deforce of Porsche Racing’s strengths. Its hybrid powertrain now develops a total system output of 1160 hp. The Evo weighs only 849 kilograms, and its modified – now active-aerodynamics generate more than 50% additional downforce compared to the now outdated WEC racing car. Top speed at the Nürburgring was 369.4 km/h (229.5 mph). Ironically – as noted – such aggressive aero tweaks are being outlawed for next season.

LMP Team Principal Andreas Seidl provided the commercial: “As a race team we constantly search for challenges that push a car, driver and team to operate on the limit. Conquering the “Green Hell” provided such a challenge. Since last winter we were preparing for that task together with our tire partner Michelin – painstakingly and with a great deal of respect for this track. We have shown the full potential of the 919 Evo.”

Fritz Enzinger, Vice President Porsche LMP1, added: “A big thank you goes to our development team in Weissach and the crew on site for the focused and safe operation of this record attempt. It is terrific what our team has achieved in four years in the World Endurance Championship: From 2015 to 2017 three overall wins in Le Mans and three drivers’ and three manufacturers’ world championship titles. This isn’t easy to be reproduced by anyone. The Tribute Tour is our homage on these years. We didn’t want to see the most innovative race car of its time disappearing unceremoniously in to the museum.”

The technical regulations from the FIA for the WEC and Le Mans, introduced in 2014, successfully delivered – at enormous cost from $100 million teams – close competition between the conceptually very different class 1 Le Mans hybrid prototypes entered by Audi, Porsche and Toyota.

The Porsche  919 Evo is roughly based on the 2017 world championship car. Developments that were prepared for the 2018 WEC but never raced after the withdrawal at the end of 2017 were included. Additionally, several aerodynamic modifications were made.

On the 919 Hybrid Evo the entire hardware of the powertrain remained untouched. The 919 is powered by a compact two-liter turbo charged V4-cylinder engine and two energy recovery systems – brake energy from the front axle combined with exhaust energy. The combustion engine drives the rear axle while the electronic motor boosts the front axle to accelerate the car with four-wheel drive. At the same time, it recuperates energy from the exhaust system that otherwise would pass unused in to the atmosphere. The electrical energy that comes from the front brakes and the exhaust system is temporarily stored in a liquid-cooled lithium ion battery.

WEC efficiency regulations limited the energy from fuel per lap by using a fuel flow meter. The V4 combustion engine’s output back then was around 500 horsepower. Equipped with illegal updated software but running the regular race fuel (E20, containing 20 per cent bio ethanol), the Evo version delivers 720 hp.

Because the amount of energy from the two recovery systems that could be used was limited as well in terms of electric megajoule per lap, the systems stayed far below their potential, according to Porsche engineering. With now full boost being available, the e-machine output increased 10%  from 400 to 440 hp.

The aerodynamics of the 919 Evo are radically different from the regulations. The new larger front diffuser now balances the new and very large rear wing, both of which have an actively controlled drag reduction systems (DRS). The hydraulically operated systems trim the trailing edge of the front diffuser and opens the slot between the rear wing main plane and the flap respectively to reduce drag. Underneath the Evo the turning vanes and floor have been optimized. Fixed height side skirts increase the aerodynamic performance again as efficiently as possible. In total, the aero modifications resulted in 53% higher downforce and an increase in efficiency by 66 % compared to the 2017 Spa WEC qualifying car.

Compared to the car in conventional race trim, the dry weight was reduced by 39 kilograms to 849 kilograms. To achieve this, air-conditioning, windscreen wiper, several sensors, electronic devices from race control, lights and the pneumatic jack system were removed. Michelin developed special tire compounds for the 919 Evo that produces more downforce than a Formula One car.

The attempt at the Nordschleife closes the chapter of chasing records with the Porsche 919 Hybrid Evo. At “moderate speeds,” the car will have several more appearances: