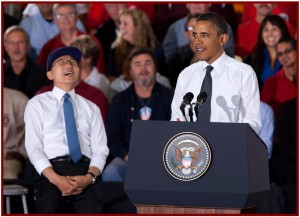 The trade agreement is hardly free, according to critics, but it's change the President believes in.

Korea is the fifth largest producer and fourth largest exporter of motor vehicles in the world, and up to now its car market has been closed to outsiders, even as U.S. taxpayers prop up its economy with massive amounts of defense spending more than 50 years after the Korean war or “police action” ended.

To a carefully screened audience, which included the CEO of General Motors, Dan Ackerson, and UAW President, Bob King – both beholden to the Democrats for saving General Motors from oblivion – Obama in a 25 minute campaign speech defended the Korean FTA that just passed both houses of Congress and is headed for his certain signature in spite of his campaign promises against such deals. Michigan and the other Midwest automaker states are crucial in Obama’s attempt to stay employed after the 2102 election. Nonetheless unemployment rates in Michigan remain among the highest in the U.S. in spite of massive deficit spending.  (See Korean Free Trade Agreement gets UAW, Ford Support)

Obama said that the Korean FTA would not have been possible without the help of King and the UAW, which was alone among all other U.S. organized labor groups to support the agreement. Critics say the FTA is almost certain to result in the loss of  more U.S. manufacturing jobs, under the “no jobs” Obama Administration.

The AFL-CIO has repeatedly said “The Korea agreement is the largest off-shoring deal of its kind since NAFTA,” estimating that it likely will displace 159,000 U.S. jobs, mostly in manufacturing. Worse, according to the AFL-CIO, loopholes will allow unscrupulous businesses to import illegally labeled goods from China and possibly even from sweatshops in North Korea—potentially without any tariffs at all. (See Obama Administration Submits Controversial FTAs to Congress. Largest Loss of Jobs since NAFTA Coming?)

“Now, here’s the thing, said the President who once along with the UAW vehemently opposed the deal. “We live in a global economy, and that means most of the potential customers for American companies like GM won’t just be here in the United States; they’ll be all around the world. And the more goods and services we sell abroad, the more jobs we create here at home.”

“Now, Korea is one that is critically important, because understand Korea has 50 million people; it’s one of the fastest-growing countries in the world. It’s one of our closest allies and our closest friends. And — President Lee and I talked about this when we had dinner the other night — our trade is basically balanced between the United States and Korea. They buy as much stuff from us as they sell to us — and that’s how fair and free trade is supposed to be. It’s not a one-sided proposition. That’s how trade is supposed to be. And I know President Lee doesn’t mind me saying this, even though he’s a Hyundai guy. If Americans can buy Kias and Hyundais from Korea, then I know Koreans should be able to buy some Fords and Chryslers and Chevys that are made right here in the United States of America,” Obama said.

Korea ranks at the very bottom — 30 out of 30 among the largest automotive markets — for auto market access, according to Ford Motor, which also supported the FTA while opposing an equivalent Korean FTA in the European community. The average among major developed economies is 40% market penetration by imported automobiles. In Korea, the total of import vehicles from all global manufacturers in all countries entering the Korean market is around 8%. This is about 90,000 vehicles in a market that buys more than one million vehicles annually.

The U.S. Korean FTA – it’s claimed – will help redress this imbalance. The revised Korean Free Trade Agreement eliminates tariffs on more than 95% of industrial and consumer goods within five years, according to the White House. But it also protects the Korean beef and pharmaceutical industries.

In the revised agreement only 25,000 cars per U.S. automaker can be imported into Korea, provided they meet U.S. federal safety standards, even though they do not meet Korean standards, which are designed to exclude imports.

GM because of it ownership of Daewoo already has a substantial position in Korea, unlike Ford, which refused to bail out an ailing Kia late in the last century. Chevrolet is being introduced in Korea in 2011. GM Daewoo was formed from the extinct Daewoo Group, which went bankrupt in 1999. It has five manufacturing facilities in Korea, as well as an assembly facility in Vietnam. GM Daewoo also provides vehicle kits for assembly at GM facilities in China, Thailand, India, Colombia and Venezuela. GM Daewoo sells in Korea and exports almost two million units annually.

GM Daewoo has been one of the world’s fastest-growing vehicle producers over the past eight years. Between October 17, 2002, when the company was established, and the end of September 2010, it produced 11,129,597 units, including 5,342,908 complete vehicles and 5,786,689 complete knockdown (CKD) kits for assembly outside Korea.

“The Agreement will promote the further integration of the U.S. and Korean economies and enhances the competitiveness of U.S. businesses in the world’s 12th largest economy,” President Obama said in a previous statement.

We shall see. And we shall also see if the unpopular President joins the unemployed after next year’s election, the jobs issue – to be fair – is one neither party is doing anything about.