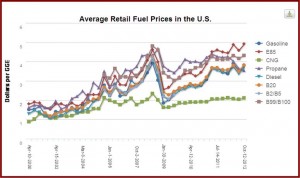 It remains to be seen how ethanol now fairs in public opinion with evidence emerging it is adding $1 per gallon because of Federal mandates in a previous so-called energy independence bill.

In his weekly radio address, President Obama spoke from the Argonne National Laboratory about reducing our dependence on oil by diverting taxes from the development of oil and gas on government-owned lands for more research on alternative fuels and energy.

Leaving aside the controversy over President George W. Bush’s plan to do so under the flawed Energy Independence and Security Act of 2007, which mandates ethanol that apparently is now adding $1 per gallon to the price of gasoline, the question remains is this just Washington politics from an Administration whose approval rating is dropping or is it sound national policy?

The Administration argues that the way to break a cycle of spiking gas prices for good is to shift our vehicles off oil for good. The same or similar arguments, of course, were put forth when EISA was passed. It mandates the use of 36 billion gallons of renewable fuels by 2022 as part of  its plan to wean the U.S. from dependence on foreign oil, and the political instability issues surrounding it  – once again – in full nightly news view with coverage from the mid-east.

Coming after the massive federal handouts to un-prosecuted ‘Banksters’ and Wall Street firms that ruined our economy and cut our wealth in half, from the poorly conceived and badly managed TARP program and other Federal welfare programs for the rich, there should be a great deal of skepticism on Main Street about this new proposed spending spree.

With sequester politics prevailing in DC, and mandatory cuts affecting the defense budget among other agencies, this looks to be a way of pumping money into the weapons oriented National Labs.

No jobs, a stalled economy, welfare for the rich and spiking gasoline prices are hurting the popularity of the Obama Administration.

In addition, one notable previous federal failure, the Partnership for a New Generation of Vehicles, indicates that the marketplace might be the better way to sort out energy policy. PNGV was designed to give us an 80 mpg family car by pumping billions into the national labs when the defense industry was facing an earlier budget crunch.

Billions of taxpayer dollars were indeed spent under PNGV, but the Detroit Three never built the research cars as promised. Worse, it had an unintended consequence. Since Japanese makers were excluded from the federal research program and worried it might work, Toyota then started its own research on fuel efficient hybrid cars – a segment that it now dominates in the U.S. and around the world.

The President’s latest proposal sets aside $2 billion over 10 years to support research into a range of technologies for advanced vehicles that run on electricity, homegrown biofuels, fuel cells, and domestically produced natural gas. These technologies are all under development in the private sector, as customers are demanding vehicles that are more efficient. Automakers have to respond to the market. (Read AutoInformed on EPA Reports Significant Gains in Fuel Economy During 2012 and Earth Day Milestones – History of Auto Air Pollution Regs)

The mandatory funds would come from royalty revenues generated by oil and gas development in Federal waters of the Outer Continental Shelf. (Not a mention was made of the BP oil disaster and the Deepwater Horizon drilling rig.) These revenues are projected to increase over the next several years based on a combination of leasing, production, and price trends. In addition, one could argue that it’s not a bad way to spend the money. Nevertheless, is it the best way to spend the money right now given our sluggish economy and broken tax system?

According to the EPA report cited above, from 2007 to 2012, CO2 emissions have decreased by 13% and fuel economy ratings have increased by 16%. In addition, compared to five years ago, consumers have twice as many hybrid and diesel vehicle choices, a growing number of plug-in electric vehicle options, and a six-fold increase in the number of car models with combined city/highway fuel economy of 30 mpg or higher. We now have the toughest fuel economy standards in our history so that by the middle of the next decade, our cars will go twice as far on a gallon of gas.

Due to high oil prices, the U.S. produces more oil than we have in 15 years, and  imports less oil than we have in 20 years. We’ve have also doubled the amount of renewable energy we generate from sources like wind and solar. So is further government stimulus needed, and if so how do we manage it effectively?

The Administration wants to double energy generation from wind, solar, and geothermal sources by 2020 compared to 2012 levels. The President called on Congress to make the renewable energy Production Tax Credit permanent and refundable to provide incentive and certainty for investments in new energy. Instead of continuing century-old subsidies to oil companies, the President believes that we need to invest in the energy of the future.

This is a rerun of EISA, which was supposed to be funded by eliminating such oil subsides. It never happened in pay-to-play Washington. The oil subsidies were put back in when the final bill emerged from a closed conference committee meeting reconciling House and Senate versions of the bill. It was also not a surprise that additional subsidies were given to farm states to produce the ethanol required.

Therefore, a healthy dose of skepticism is called for here, especially since there will no doubt be enough pork through needles riders and earmarks in whatever bill comes out of Congress to feed Germany.