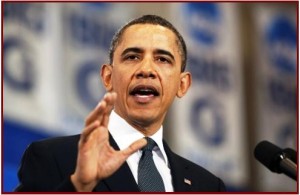 The U.S. has 2% of the world’s oil reserves yet consumes 25% of the oil. "We’ve run into the same political gridlock, the same inertia that has held us back for decades."

President Obama outlined yesterday what is the latest plan for energy independence in a speech that echoed failed political promises going all the way back to the disgraced Nixon Administration.

Obama told an audience at Georgetown University in Washington D.C. that “in an economy that relies so heavily on oil, rising prices at the pump affect everybody -– workers, farmers, truck drivers, restaurant owners, students who are lucky enough to have a car.”

Obama went on to say – like every other president before him back to 1974 – that “there are no quick fixes. Anybody who tells you otherwise isn’t telling you the truth. And we will keep on being a victim to shifts in the oil market until we finally get serious about a long-term policy for a secure, affordable energy future.”

Obama then unveiled an “energy independence” plan that he claims will cut America imported oil from 11 million barrels of oil a day by one-third during the next decade. The so called Blueprint for a Secure Energy Future outlines a “comprehensive national energy policy,” which promotes offshore drilling for oil, alternative fuels – especially natural gas and biofuels-  “safe” nuclear power, “clean coal” and energy efficiency for vehicles, homes and industry.

While most of the proposals will require cooperation among Democrats and Republicans to thwart the pervasive influence of money on legislators from the same special interests that have made a mockery of previous plans, Obama acted decisively in one area he controls:

The President ordered that 100% of federal fleet purchases by 2015 will be alternative fuel, hybrid or electric vehicles – in a taxpayer-fueled bonanza for some automakers.

Both the “clean” coal and “safe” nuclear power aspects of the President’s plan are controversial and ridden with special interest traps – to understate what will continue decades of hard fought big money lobbying battles. Indeed, shortly after the President’s speech, Public Citizen decried the acceptance of a $10 million loan to the President’s Reelection Committee just days before Japan’s earthquake from Duke Energy, a nuclear power company in the U.S.