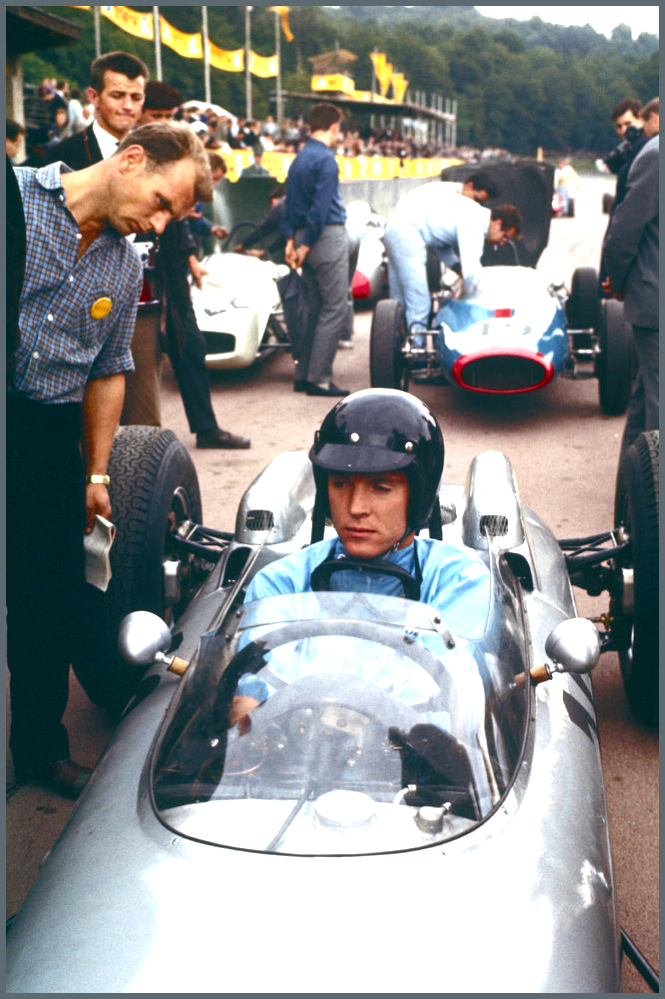 Gurney wins the 1962 Formula One Grand Prix in France in a Porsche 804 Formel 1.

Daniel Sexton Gurney died on  14 January 2018 at the age of 86. The racing rock star driver and Formula One Winner won the 1962 French Grand Prix in Rouen in an eight-cylinder Porsche 804. Just a week later Gurney led from start to finish to triumph at the Solitude racetrack near Stuttgart; his team-mate Joakim Bonnier took second place to secure a one-two for the air-cooled Porsche Type 804 in front of its home crowd.

In all, Gurney has three F1 victories and 19 total podiums – driving for formidable teams of the era, including Ferrari, BRM and Brabham. He scored first time victories for both Porsche and Brabham.

But I remember him most fondly for a first time round the track win that came for his own All-American Racers at the 1967 Belgian Grand Prix driving a car he had designed himself — an Eagle-Weslake.

Gurney went on to claiming many racing victories in the world’s toughest classes, notably kicking Ferrari’s ass in a Ford GT in 1966 at Le Mans. The unabashed American reaped success throughout his career as the first driver to win races in Formula One, NASCAR and the IndyCar Series, as well as sports car races, including with his own team. With the invention of the “Gurney flap”, he improved aerodynamic efficiency by adding a spoiler to the rear wing.

Gurney was also the first driver to spray champagne on the podium, inadvertently starting a tradition that is now imitated all around the world. Hoosier milk doesn’t foam. He won seven IndyCar races, but his best finish was 2nd at the Brickyard. He brought both Lotus and Ford to IndyCar of course.

“It was with Porsche that I really learned how to drive  – because they gave me cars that didn’t constantly break down and I could lay down the kilometers faster than ever before,” Gurney once said.

Porsche also led to lifelong love starting in the 1960s when he married his wife Evi, a former German motor sports journalist and secretary to the Porsche Racing Manager Huschke von Hanstein.

“With one last smile on his handsome face, Dan drove off into the unknown just before noon today, Jan. 14, 2018,” Gurney’s wife, Evi, and family said in a statement. “In deepest sorrow, with gratitude in our hearts for the love and joy you have given us during your time on this earth, we say ‘Godspeed.’”