Red Tail Mustang to be Auctioned at EAA Oshkosh for Eagles 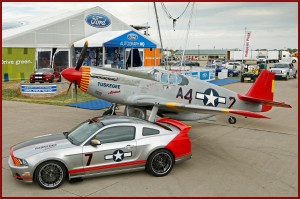 All proceeds from the Ford Motor Mustang donation and sale will go to the EAA Young Eagles program.

Ford Motor will auction a one of kind Red Tail Mustang at the Experimental Aircraft Association AirVenture convention in Oshkosh next Thursday. The single edition Mustang has VIN 00051 in honor of the red tail P-51 Mustang planes flown by the Tuskegee Airmen for more than 1,500 missions during WWII. Pervasive and viscous racism in the army kept the all black Army Air Corps unit segregated during the war.

The unique Mustang has polished aluminum non-production paint, with Race Red and School Bus Yellow, consistent with the P-51 fighter plane’s red tail and the logos and markings of the United States Army Air Corps, 332nd Fighter Group and Squadrons.

Inside the Mustang has a modified navigation screen, instrument cluster and no rear seats. The car’s Recaro seats will include the embroidered “Red Tails” logo and floor mats embroidered with the 332nd Fighter Group logo.

All proceeds from the Mustang donation and sale will go to the EAA Young Eagles program, which has provided free introductory flights to more than 1.6 million young people since 1992.

To participate in the auction, candidates must pre-qualify by contacting Elissa Lines in the EAA Development Office, 800.236-1025; or email elines@eaa.org by July 23. Visit www.airventure.org/gathering for more information.