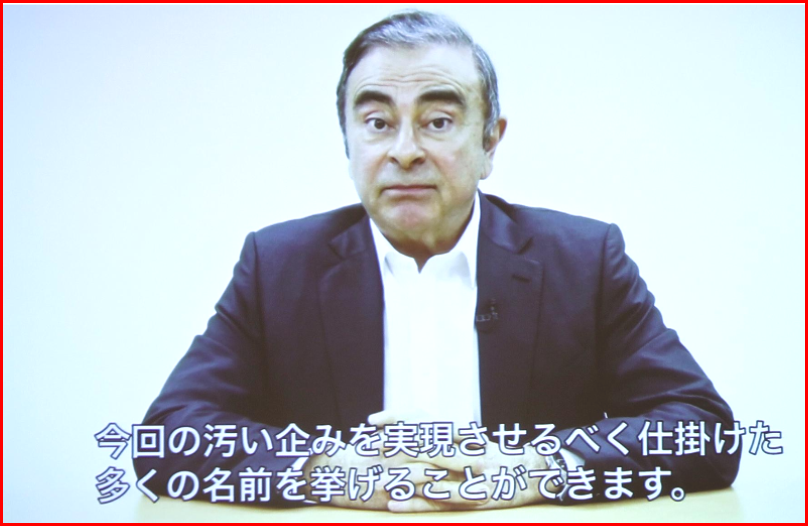 Video by former Nissan Motor chairman Carlos Ghosn shown on a screen during a news conference in April by his lawyers at Foreign Correspondents’ Club of Japan in Tokyo.

Renault’s Board of Directors today reviewed the final findings of the Joint Audit Mission that was commissioned with Nissan regarding their mutually owned subsidiary RNBV ane took a further swipe at former CEO Carlos Ghosn.

Several expenses incurred by RNBV for a total of ~€11 million include questionable air travel expenses for Mr. Ghosn; other expenses incurred for Mr. Ghosn; and gifts to non-profit organizations. (see AutoInformed.com onRenault Board Backtracking on Carlos Ghosn Innocence, Was 2008 the Year When Carlos Ghosn Went Rogue? Ghosn’s Former Speechwriter on What He Did for Nissan – And What That Did to Him,See Nissan Shareholders Dismissing Ghosn from Board)

The findings confirmed the existence of deficiencies within RNBV in terms of financial transparency and procedures for monitoring expenditure. These deficiencies were flagged by the auditors in an interim report issued early in April.  Renault disclosed this in a press release of April 3, 2019.

As of early April, and in agreement with the Audit, Risks and Ethics Committee’s proposal, the Board of Directors requested Renault’s executive management to reach out to Nissan with a view to reaching an agreement between the shareholders on corrective measures to be implemented by the end of this year.

In addition to measures decided during its meeting of April 3, 2019, the Board of Directors has resolved to ask Renault’s representatives to make contact with their counterparties from Nissan forming the governing bodies of RNBV, for the implementation of any legal actions available in The Netherlands in respect of Mr. Ghosn’s extra costs of air travel and other expenses incurred for Mr. Ghosn as well as exploring recovering from Mr. Ghosn gifts made to some non-profit organizations.

1 Response to Renault Board Confirms Expenses Improperly Used by Ghosn