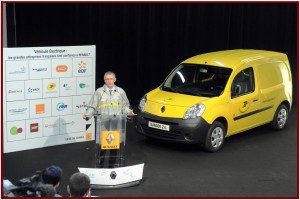 In Europe, Renault recently launched Kangoo Z.E. and Fluence Z.E., the first two of the four new-generation electric vehicles that will be released during the next year. More than 15,000 Kangoo Z.E. models (MSRP €20,000) will be delivered over a four-year period to 19 of France’s largest companies.

Since missing the hybrid segment completely that Toyota went on to dominate globally, reaping billions upon billions of dollars worth of “Green” image benefits in the process, Carlos Ghosn, CEO of both Renault and Nissan, has now “bet the farm” by investing almost $5 billion in electric vehicles. Thus far, the Nissan Leaf, with roughly 8,000 sales year-to-date, has not met expectations in the U.S. Nissan, optimistically, wants 20% of its sales to be EVs by 2020. 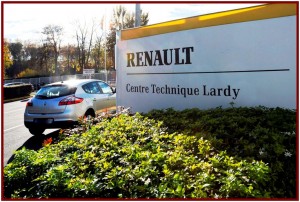 The Lardy EV Test center is the cornerstone of the brand’s development of new electric technologies and houses most of the test facilities for electric motors and batteries. Operational since 2009, it has been gradually expanded to cover 3,300 sq. meters and 100 test benches.

There are also six test benches for the power electronics unit (charger, controller and transformer): these benches enable Renault to validate the unit’s resistance to sudden temperature variations coupled with changes in electricity requirements.

Each and every component of the battery – cells, modules, battery pack and the power electronics unit – is tested and validated, from the basic unit to the entire system. Some 170,000 hours of testing are carried out over one year at Lardy by some 30 specialized engineers and technicians.

Lardy runs a series of 15 different tests on the lithium-ion batteries, simulating the most extreme conditions – short-circuiting, fire, immersion, accidental damage. Some 100 such tests will be conducted in 2011 alone, either in-house or at the facilities of French government agencies.

There are also 58 other test benches devoted to improving the performance of the 12V starter batteries – important for start/stop applications, and researching second-life applications for lithium-ion batteries.