Renault Shifts Most of New €5.7 billion Investment out of European Plants. Promises No Job Losses in France 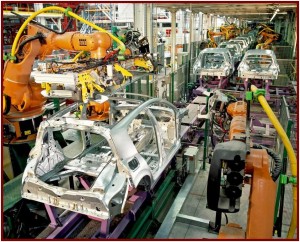 New Espace and Laguna models based on a shared Nissan platform will start at Douai, France in 2014.

Renault SA (RNO.FR) said this morning that it is adjusting its industrial base and putting €5.7 billion ($7.9 b) investment into plants by 2013, largely in emerging markets.

The French automaker was quick to add that France would remain the home of high value products such as electric vehicles, and receive about 40% of the new investment. Full details of the revised Renault strategic plan will be revealed next week along with full 2010 results.

The announcement is an obvious move to ameliorate negative coverage when Renault reveals what are expected to be positive 2010 results. Renault has already issued an unusual pre-results press release on Monday that said it had returned to profitability in 2010, with an estimated operating margin at 2.8% of revenues, better than a -1.2% in 2009.

Today Renault CEO Carlos Ghosn said “The performance and competitive edge of our plants will be crucial to the success of our forthcoming strategic plan.” He also said no layoffs in Western Europe were contemplated, a statement that met with restrained skepticism among unions in France.

The impending investment shift is the latest blow to ailing European economies.

Renault said that there will be a lasting slump in the European market; in 2010 vehicle sales of 15.3 million were 20% lower than in 2007.Renault forecasts that by 2016 the market will remain below the pre-financial crisis levels of 2007.

Instead automobile growth will be driven by markets outside of Europe:

Renault and rival French automaker Peugeot-Citroen, number three and two European automakers respectively, received loans of €3 billion from the French taxpayers in 2008 when global financial markets were frozen and vehicle sales collapsed. Each has since repaid €1 billion. Renault said some more of the loan will be repaid this year.