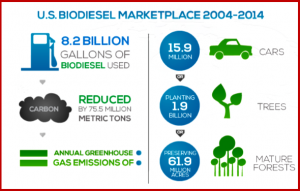 During 2010, Washakie issued more than 7.2 million Renewable Identification Numbers, aka RINs. It reported to EPA that it produced the biodiesel associated with those RINs at its Plymouth, Utah refinery. During that time, Washakie made no biodiesel at the Plymouth facility.

President Bush’s Energy Independence and Security Act of 2007, aka EISA, created a number of federally funded programs that provided money for the production of biodiesel and encourage biodiesel use in the United States, among other renewable fuels.

Biodiesel can cut greenhouse gas emissions by up to 86%, particulate matter emissions by up to 47%, and hydrocarbon emissions by up to 67%, according to an industry trade group. Biodiesel is produced from renewable resources including used cooking oil, soybean oil, or animal fats. Some claim that biodiesel is a sustainable fuel source that provides more energy security because of a reduced dependency on oil imports. Critics say that the renewable fuel program is nothing more than a massive industry subsidy that raises food prices and in the case of ethanol consumes more energy than it creates.

Renewable fuel producers and importers generate RINs for each gallon of renewable fuel in the U.S. market that meets greenhouse gas emissions reduction standards established under the Renewable Fuel Standard. Washakie will pay a $3 million penalty under the settlement, which was lodged today in the U.S. District Court for the District of Columbia.

EPA – under heavy attack from a declared war by Republicans urging people to ignore legal regulations because they are in the pocket of various big-money special interests – is responsible for developing and implementing regulations to ensure that transportation fuel sold in the United States contains a minimum volume of renewable fuel.

The Renewable Fuel Standard program – created under the Energy Policy Act of 2005 – was developed in collaboration with refiners, renewable fuel producers, and environmental groups. It was expanded and strengthened under the Energy Independence and Security Act of 2007, which was designed to encourage the blending of renewable fuels into our nation’s motor vehicle fuel supply, and reduce the nation’s dependence on foreign oil, subsidize the renewable energy industry, and achieve greenhouse gas reductions.

President Bush, a Republican, signed EISA into law on December 19, 2007, in response to his “Twenty in Ten” program. It was Bush’s goal to reduce gasoline consumption by 20% in 10 years.

Ken Zino is an auto industry veteran with global experience in print, broadcast and electronic media. He has auto testing, marketing, public relations and communications expertise garnered while working in Asia, Europe and the U.S.
View all posts by Ken Zino →
This entry was posted in alternative fuels, fuel economy or emissions, litigation and tagged autoinformed, autoinformed.com, eisa, Ken Zino. Bookmark the permalink.