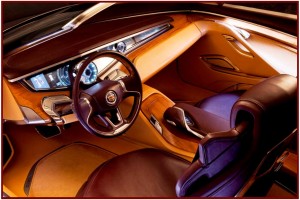 In a nod to political correctness for what is after all a “let ‘em eat cake” concept, Cadillac points out that Italian olive wood is a sustainable material.

Cadillac unveiled the Ciel concept, a large four-seat convertible ahead of the Pebble Beach Concours on Sunday. The huge concept, reminiscent of the luxury cruisers of the 1950s, and the four-door, pillar-less Lincoln convertibles of the 1960s, is a rear wheel drive configuration with a longitudinally mounted V6 engine. Ceil celebrates the romance of the past of gracious automobiles.

Ciel is also further evidence that the V8 engine is about to be on the endangered species list for most automakers going forward. Ciel is powered by a twin-turbocharged version of the 3.6-liter Direct Injection V6 engine in use at Cadillac, along with GM’s mild hybrid system with a small lithium ion battery and low-speed electric motor and all-wheel-drive.

“Large, expressive luxury is innate to Cadillac and the Ciel recalls that heritage, while suggesting where the brand can go in the future,” said Clay Dean, global design director for Cadillac.

The doors are “French-style,” with the rear doors hinged at the rear (aka suicide doors) and as noted there is no B-pillar, so when the doors are opened, the handsome interior is in full view.

While the exterior is said, with no little bombast, to be pushing Cadillac’s Art & Science philosophy into a “new stratum,” it’s really the handsome interior that distinguishes the car and shows how far from “luxury” mass produced “luxury cars” have strayed.

In a nod to political correctness for what is after all a “let ‘em eat cake” concept, Cadillac points out that Italian olive wood is a sustainable material. The wood used in the Ciel came from a single fallen and recycled tree, from a west coast producer of olive oil.

The wood was dried in a kiln, before it was cut for the Ceil concept vehicle. Each component was hand-milled and finished by woodworking craftsmen.

Like the exterior, the passenger space is accented with sweeping nickel-plated trim. It divides the body-color upper sections from a complementing beige lower color. The olive wood, machined aluminum and hand-tipped leather are elements that flow through the interior, complementing the primary colors with warm, rich tones. 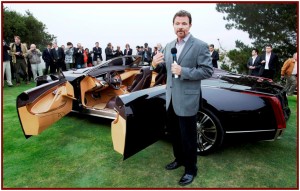 “There is authentic craftsmanship in the way the exterior and interior elements meld, much like a vintage wooden boat,” said Gael Buzyn.

“There is authentic craftsmanship in the way the exterior and interior elements meld, much like a vintage wooden boat,” said Gael Buzyn, interior design manager. “It is romantic, not only in its form, but the materials – nothing smells as good as real wood and leather. It blends together for a rewarding feeling of uncompromising luxury.”

Driving California’s Highway 1 in an open car while the sun sets, from Big Sur north to Monterey, is the type of journey the Ciel team envisioned during its design, Cadillac said.

“The Ciel is about the romance of the drive,” said Dean. “It emulates the great touring cars seen on the greens at Pebble Beach, but with a modern flair that projects Cadillac’s vision for the future.”

The Ciel was developed at GM Design’s North Hollywood Design Center, which is managed by Frank Saucedo. Niki Smart was the lead exterior designer, with Buzyn leading interior development.