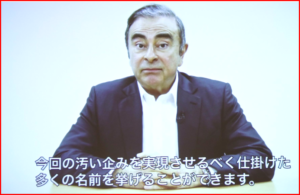 Video by ex-Nissan Chairman Carlos Ghosn shown on a screen during a news conference by his lawyers at Foreign Correspondents’ Club of Japan in Tokyo.

Reuters today said that “Ousted Nissan boss Carlos Ghosn has confirmed he is in Lebanon saying he refused to be ‘held hostage’ by a ‘rigged’ Japanese justice system, raising questions about how one of the world’s most-recognized executives exited Japan months before his trial.”

The timing showed signs of cunning since the Japanese government virtually shuts down for the New Year Holiday, as do the Asian bureaus of major news organizations. Ghosn and his attorneys have repeatedly questioned the fairness of the so-called Japanese justice system, which uses solitary confinement and what looks to be forced confessions to western reporters. Ghosn had rich, powerful friends in business and the Lebanese Government, a country where he is the equivalent of royalty even down to appearing on a postage stamp. As a latter-day tycoon, he had numerous global connections at the top of the business and policy making elite. (Universal City Nissan Sues Saudi Billionaire, Khaled al-Juffali and Nissan Motor, Among Others, over Payoff by Carlos Ghosn)

“Ghosn’s abrupt departure marks the latest dramatic twist in a year-old saga that has shaken the global auto industry, jeopardized the alliance of Nissan Motor Co Ltd and its top shareholder Renault SA and cast a harsh light on the fairness of Japan’s judicial system,” Reuters reported.

“I am now in Lebanon and will no longer be held hostage by a rigged Japanese justice system where guilt is presumed, discrimination is rampant, and basic human rights are denied,” Ghosn, 65, said in a brief statement on Tuesday.

“I have not fled justice – I have escaped injustice and political persecution. I can now finally communicate freely with the media, and look forward to starting next week,”  Reuters posted.

Ken Zino is an auto industry veteran with global experience in print, broadcast and electronic media. He has auto testing, marketing, public relations and communications expertise garnered while working in Asia, Europe and the U.S.
View all posts by Kenneth Zino →
This entry was posted in fools 'n frauds, litigation, people and tagged auto industry commentary, autoinformed.com, Kenneth Zino, Reuters on Ghosn. Bookmark the permalink.