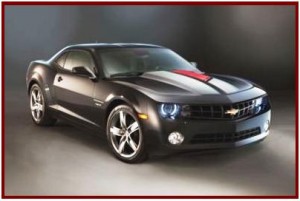 Here comes yet another Camaro anniversary edition – the 45th birthday model, which arrives this summer as a special package building on numerous 2012 Camaro improvements, including a more powerful 3.6-liter V6 engine and a new FE4 suspension package for SS coupes.

There are also several interior and technology changes, such as a revised instrument panel design, a new steering wheel and rear camera system.

Also coming in early 2012 is, the high-performance Camaro ZL1, which Chevrolet claims is the most technically advanced car ever developed in its class. 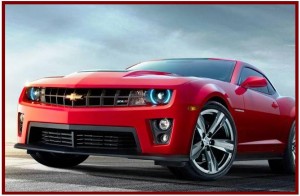 ZL1, the most powerful factory-built Chevrolet Camaro in history.

ZL1 has a supercharged V8 engine, producing an estimated 550 horsepower (410 kW) and 550 lb.-ft. of torque (677 Nm). This means it will be the fasted factory-built Camaro in history. Official estimates of the ZL1’s performance capabilities will be released later, as testing nears completion.

ZL1 borrows heavily from the advanced technology used by Cadillac and Corvette. This will likely spur some lengthy – and tiresome – discussions among enthusiasts and debates about which cars are the better values

Camaro’s new 3.6L direct injection V6 – the LFX engine – goes into production this summer. It delivers an SAE-certified 323 horsepower (241 kW) at 6,800 rpm – an increase of 11 horsepower (8 kW) over the 2011 engine. This means the LFX delivers the more  standard power than the Ford Mustang 305 horsepower V6, at least as of now. LFX is also 20.5 pounds (9.3 kg) lighter than its predecessor, which chips way at Mustang’s lighter weight advantage of roughly 300 pounds. .

Direct injection optimizes fuel delivery directly into the combustion chamber, of course, which is why virtually all automakers are using the fuel saving and power boosting design, even though the high pressure fuel pump and delivery system is more expensive and noticeably nosier.

A new Camaro FE4 suspension also debuts as a performance improvement for the Camaro SS coupe in 2012.

“Our objective was to create a more precise sport suspension for the SS coupe, with greater road-holding capability,” said Al Oppenheiser, Camaro chief engineer. Flatter cornering, a more neutral balance during hard turns, and minimized understeer at the limit are claimed. 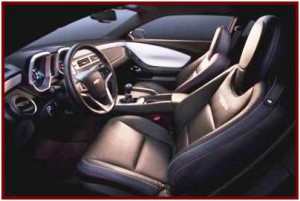 “The appeal of Camaro design and performance has powered it to the top of its segment,” said Rick Scheidt, vice president of Chevrolet marketing.

The 2012 model year interior updates include a revised instrument panel, with new instrument graphics and trim, as well as a new steering wheel design and a power lift function for the front passenger seat.

Outside for 2012, a new rear spoiler will be added as a standard feature for Camaro; and the taillamps that had been a part of the RS appearance package option are also being made standard. A new, body-color “sharkfin” antenna joins the RS package, and Crystal Red Tintcoat replaces Red Jewel as an exterior color.