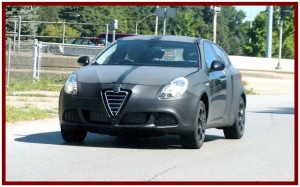 Alfa testing mule for new compact Dodge under development is caught by Jim Dunne in Michigan.

Fiat announced a new management structure in Turin Thursday, reverting to a form of corporate governance that was previously used at Fiat S.p.A. before it spun off its industrial products group at the beginning of this year. Both the management of Fiat Automobiles and Chrysler will be merged on September 1 under a plan that creates a Group Executive Council dominated by Fiat executives.

“We have now reached the right moment to step on the accelerator of Fiat-Chrysler integration,” said Sergio Marchionne, Chief Executive of Fiat and Chrysler.

The Council is comprised of 22 members, 13 of whom are from Fiat, which is now the sole owner of Chrysler except for a UAW retirement health care trust fund. Sergio Marchionne remains CEO.

In effect the automobile businesses of both companies are merged and will be run under four regional groupings. It appears that all Chrysler brands are being treated as potentially international offerings under the revised structure, although the reorganization was not announced on the Chrysler media site. Marchionne put himself in charge of the NAFTA region, which includes the United Stares where Fiat is currently only selling the Fiat 500.

On Tuesday Chrysler Group LLC said that in Q2 2011, net revenues increased 30% to $13.7 billion compared to Q2 2010. However, Chrysler posted a loss because it paid back various government loans six years ahead of schedule that came from its controversial 2009 taxpayer financed bailout. U.S. taxpayers took a $1.3 billion loss from the transactions which saw Italian Fiat become the owner of 53.5 % of Chrysler stock. The only other shareholder remaining is the UAW health care trust fund or VEBA.

Chrysler intends to increase its stake by another 5% by the end of the year by diluting the stock by issuing new shares.

By Chrysler’s accounting, Chrysler said it would have reported a $181 million profit in the second quarter, but took a $551 million one-time charge to repay loans from the U.S. Treasury Department and the Canadian government.

In a release Thursday Fiat said the Group Executive Council (GEC) is the highest executive decision making body within Fiat outside of its Board of Directors.  GEC is responsible for reviewing the operating performance of the businesses, setting performance targets, making key strategic decisions and investments for the Group and sharing best practices, including the development and deployment of people.

The GEC has four groups:

The first is composed of four Regional Operations Groups for car manufacturing and sales, plus Parts and Service (MOPAR), Automotive Components (mainly Magneti Marelli) and Systems and Castings (Teksid and Comau). Each will be the responsibility of a Chief Operating Officer (COO) who will manage via a regional Management Team, which has not yet been announced. The COOs are accountable for Profit and Loss of their region/business, the management of regional resources, including manufacturing and commercial activities.

The second group concerns brands. Each of the global or what are described as potentially global brands is represented on the GEC, with the charge to improve and develop an appropriate brand portfolio and to assist in the development of adequate commercial and marketing strategies in each of the Group’s operating regions.

The Brand Heads appointed to the GEC are as follows:

They will be supported by a Chief Creative Officer, Olivier François.

The third group is composed of industrial process leaders, who standardize systems across the operating regions, and “optimize” the capital allocation choices the Group will face in the years to come.

The final group is composed of support / corporate functions

The GEC will use Alessandro Baldi as the Executive Coordinator.