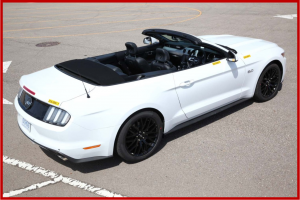 A right-hand-drive prototype of the upcoming 2015 Mustang has been spotted as it underwent initial testing. Although the original pony car will continue to be built with its latest accoutrements this fall in an ex-Mazda plant in Flat Rock, Michigan, the Mustang will eventually be exported to 25 RHD markets, including the United Kingdom, Australia and South Africa. Mustang will also find its way into Asia after series production starts.

The 2015 Ford Mustang continues the current look with what’s an all-new platform for the original pony car. However, to the casual observer, the Mustang might appear as a nice freshening with a new grille and taillights. The stance is wider with a slight reduction in roof height, and larger rear fenders and track, while the wheelbase is the same.

This is not the radical change the last Camaro underwent, one that leapfrogged the Bow-Tie response into finally outselling the Mustang. To be sure, the new Mustang fastback and convertible models keep the original design themes – long sculpted hood and short rear deck – that goes back to the 1960s. Ford is calling it a “contemporary execution,” and among the millions of Mustang faithful, it might be enough or more than enough to keep U.S. sales going.

Underneath there are three revised powertrains – a more powerful 5-liter V8, a 3.7-liter V6 and a controversial four-banger, the latest 2.3-liter EcoBoost engine. The transmissions appear to be carried over, with new steering wheel-mounted shift paddles for the automatic.

The Mustang EcoBoost engine uses direct injection, variable cam timing and turbocharging to deliver what is projected as segment-leading fuel efficiency, if anyone cares in this type of vehicle. A unique intake manifold and turbocharger housing are part of the design with output projected at more than 305 horsepower and 300 lb.-ft. of torque.
With what will be at least 300 horsepower and 270 lb.-ft. of torque from the standard 3.7-liter V6, this looks to be the smart shopper’s choice, particularly people who remember Ford’s last, failed, foray into offering a turbocharged four-cylinder Mustang.

Mustang has all-new front and rear suspensions. A new perimeter subframe helps to stiffen the front structure while reducing mass, providing a better foundation for more predictable wheel control that benefits in theory handling, steering and ride, according to Ford. This new double-ball-joint front MacPherson strut system also enables the use of larger, more powerful brakes.

At the rear is an all-new integral-link independent rear suspension. The geometry, springs, dampers and bushings all have been specifically tuned for this high-performance application. New aluminum rear knuckles help reduce unsprung mass for improved handling of what can be a rough running riding sporty car.

The United States is the largest market for Mustang with more than 9.2 million sales since the car’s debut in 1964. Year-to-date 51,000 have been wholesaled, second to the Chevrolet Camaro at 57,000.

Ken Zino is an auto industry veteran with global experience in print, broadcast and electronic media. He has auto testing, marketing, public relations and communications expertise garnered while working in Asia, Europe and the U.S.
View all posts by Kenneth Zino →
This entry was posted in new vehicle and tagged autoinformed, autoinformed.com, camaro, Ken Zino, mustang. Bookmark the permalink.