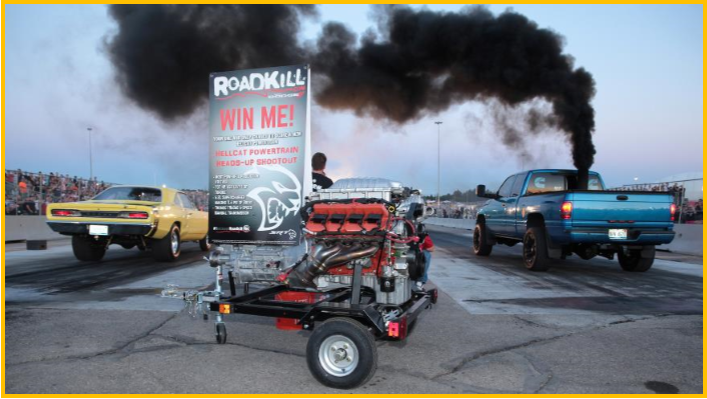 Here’s irony, street-legal racing will be sanctioned on Woodward Avenue in Pontiac, MI, on the eve of the Dream Cruise for the first time in history. Revenue racing, er that is raising, thus shifts from violation enforcement by cops to event marketing. Registration is now open for the Michigan return of the “Roadkill Nights Powered by Dodge.” Last year, the inaugural event at the defunct Pontiac Silverdome drew more than 10,000 spectators it’s claimed.

This year’s race takes place on 19 August and is promoted as bigger with a new, larger location at the M1 Concourse in Pontiac. A total cash purse of $19,000 is at the finish line of a shortened 1/8 mile track.

“Woodward is one of (if not the) most famous ‘Muscle Car Corridors’ in the country. This, as far as we know, is the first time ever that street racing on it will be legal,” said Tim Kuniskis, Head of Passenger Cars, Dodge, SRT, Chrysler and FIAT – FCA, North America.

“Drag racers will be able to show their muscle when Woodward is closed from South Boulevard to Rapid Street in Pontiac to create what is sure to be an epic kick off to the weekend’s cruise events,”Kuniskis gushed.

Leading the races will be David Freiburger and Mike Finnegan, co-hosts of Roadkill, allegedly the most-viewed YouTube automotive series in the world.

“This event is uniquely Roadkill. We are racing in a spot no one else would dare to run all in the name of fun. Show up and you’ll see Roadkill cars, come and spend time with us and have the time of your life,” claimed Mike Finnegan.

Open from noon to 10 p.m., Roadkill includes thrill rides in Dodge Viper, Dodge Challenger SRT Hellcat and Charger SRT Hellcat muscle cars. There’s also  a Show ‘n’ Shine area where people can display there rods. There will  be, Roadkill stunts and exhibitions, as well as live music, food trucks and what undoubtedly be a car centered, state fair atmosphere.  .

Roadkill Nights Registration Information
Registration is open at Roadkill.com/PR. General admission is free for spectators. Participants may register a vehicle for drag racing and the Show ’n’ Shine at the site.

Pricing is as follows and spaces are limited:

Ken Zino is an auto industry veteran with global experience in print, broadcast and electronic media. He has auto testing, marketing, public relations and communications expertise garnered while working in Asia, Europe and the U.S.
View all posts by Ken Zino →
This entry was posted in marketing, racing and tagged autoinformed, autoinformed.com, dream cruise, Ken Zino, roadkill, TEN: The Enthusiast Network. Bookmark the permalink.