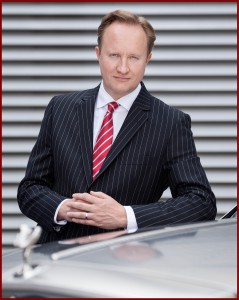 “Giles Taylor has a deep knowledge of emotive brands in the luxury segment,” said BMW.

Taylor replaces Ian Cameron, who retires from the role he has held since 1999.

Taylor, a 44 year-old Brit, spent 10 years as an executive designer in the British car industry, acting as head of design for two model series at Jaguar. He joined the Rolls-Royce design team in April 2011 as Head of Exterior Design.

Ian Cameron joined the BMW Group in 1992 and held leading design roles for several models, including the 3 Series model range, the Z8 and the Range Rover.  In 1999, he was appointed to lead the new Rolls-Royce design team, resulting in the launch of Phantom in 2003 and all subsequent Phantom and Ghost family models.

When Ian retires from his design role, he will remain within the BMW Group until the onset of his retirement age in April 2013, working on Rolls-Royce global heritage matters as Brand Ambassador within BMW Group.