Ron Bloom Resigns as Assistant to the President for Manufacturing Policy. Was Key Player in Auto Bailouts 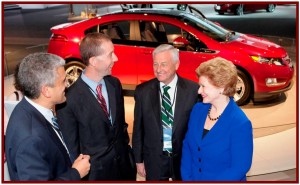 The White House announced today that Ron Bloom will be stepping down from his position as the Assistant to the President for Manufacturing Policy at the end of August. Since September of 2009, Ron Bloom has coordinated the Obama Administration’s manufacturing policy.  Prior to assuming this role, Bloom served at the Department of the Treasury on the President’s Task Force on the Automotive Industry.

Bloom was part of  a team headed by Stephen Rattner at the U.S. Treasury Department that was responsible for forcing drastic bankruptcy restructurings and CEO firings at General Motors and Chrysler as they were on the verge of being liquidated in 2009.

The Obama Administration ultimately saved millions of U.S. auto jobs, including those at Ford Motor Company and transplanted auto factories, as well as the reorganized GM and Chrysler.

Bloom also played a key role in the recent agreement between the federal government and leading automakers to raise light-duty vehicle fuel economy standards to 54.5 miles per gallon by 2025.  Over the life of the program, these standards will save consumers  $1.7 trillion and reduce oil consumption by an  estimated 12 billion barrels.

“For the past two and a half years, Ron Bloom’s leadership and expertise has helped us put America’s automakers back on the road to recovery, launch new partnerships to make our manufacturers more competitive, and set aggressive fuel economy standards that will save consumers and businesses money at the pump,” said President Obama. “I’m grateful for his service, and wish him well in his future endeavors.”

“We’ve faced many tough choices and dealt with numerous challenges over the past two and a half years — from  restructuring the American auto industry to developing historic fuel efficiency standards.   I am confident in this Administration’s ability to build on these accomplishments and continue our efforts to revitalize the manufacturing sector,” said Bloom.

Prior to joining the Treasury Department Mr. Bloom served as a Special Assistant to the President of the United Steelworkers.  His responsibilities included the Union’s collective bargaining program in its core jurisdictions, with an emphasis on the particular issues facing the Steelworkers in its dealings with companies facing financial difficulties or undertaking corporate transactions.  He also coordinated the Union’s relationships with investors, in both public and private companies.

Ron Bloom, 56, was born in New York City.  He received his undergraduate degree from Wesleyan University and graduated with distinction from the Harvard Graduate School of Business Administration. Bloom will be returning to his long-time residence of Pittsburgh, PA to take the opportunity to spend more time with his family.  (See also Ex Car Czar Rattner Settles Bribery Charges for $10 Million)