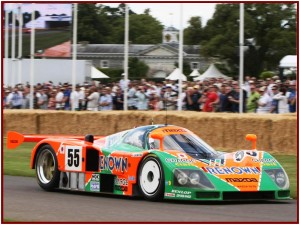 In 1991 Mazda wrote a new chapter in Le Mans motorsport history with the rotary-powered 787B.

The 1991 race-winning rotary-powered Mazda 787B sports car will be a ‘Legend of Le Mans’ and join ten other race cars in celebrations of the 90th anniversary of the 24 Hours in June. The race organizers, the Automobile Club de l’Ouest or ACO asked people to join an internet poll to pick one car that best embodied the spirit of Le Mans from each of the 10 decades of the race. More than 20,000 fans cast their votes online.

For the 1990s, the voting – using French sponsorship and nationalist math – was a “dead-heat” between the Mazda 787B and the Peugeot 905 – so 11 cars were given ‘legend’ status.

Mazda remains the only Japanese manufacturer to have won what is arguably the world’s toughest endurance race, the Le Mans 24 Hours.  In 1991 Mazda wrote a new chapter in motorsport history with the rotary-powered 787B.  The racer, which boasted a 210mph top speed, was driven by Britain’s Johnny Herbert, with Volker Weidler and Bertrand Gachot.  Running faultlessly, the 787B completed 362 laps (3,065 miles) at an average speed of 127.62 mph to take the checkered flag.

The ACO plans to bring together examples of each of the legendary cars for a series of events prior to the 2013 race and for a parade lap of the 8.47-mile Circuit de la Sarthe before the start of this year’s 24 Hours race on June 22/23.