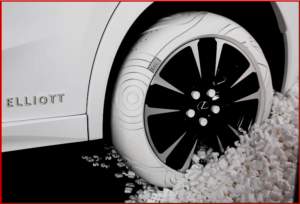 Lexus says that to celebrate the launch of the first-ever 2019 UX, a compact crossover, Lexus partnered with designer John Elliott to create the “Sole of the UX” — custom tires inspired by his John Elliott x Nike AF1 shoe.

“The tires re-imagine the classic silhouette of Elliott’s sneaker, embodying the spirit of clean, purposeful, and modern design. Tires that, like the crossover itself, are inspired by and designed for the city,” Lexus said.

Revealed at Elliott’s New York Fashion Week after-party on 9 February 2019, the collaboration features an all-white UX with custom tire details, including white on white layers, double-stitched leather and a stepped metal air valve vaguely like his stacked metal lace tip. The first-ever UX was crafted for the city and the “modern urban explorer” — those seeking a fresh, contemporary and dynamic take on luxury driving.

“We were excited to merge the streetwear narrative and design cues of our Air Force 1 with a brand like Lexus. We’re thankful they’ve allowed us to use this moment to celebrate the arts and to bring extra energy to our take on a classic,” said John Elliott.

At the event, Elliott showcased unique iterations of the John Elliott x Nike AF1 by artists Actual Source, Hassan Rahim, Matt McCormick, and Yung Jake — all pioneers in their respective fields. Using the John Elliott x Nike AF1 as their canvases, these one-of-a-kind custom sneakers were auctioned off at the event with all proceeds benefiting Inner-City Arts, an organization based in downtown Los Angeles with a mission to provide access to arts education for LA’s most underserved youth.