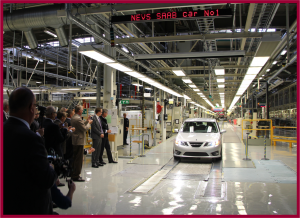 The electric car based on the Saab 9-3 launches in 2014, with China as the first market.

National Electric Vehicle Sweden AB has started production of the Saab 9-3 Aero Sedan equipped with a gasoline engine. The initial production rate by the Chinese-owned consortium formed by Japanese, Swedish and Chinese investors is boutique level at 10 cars per week, gradually increasing if demand appears. The company said that over time it would expand into more markets where there is potential for growth and profitability.

Sales are initially in China with a small number of vehicles sold directly to Swedish customers via the NEVS’ website. The aging 9-3 design, introduced in 1992, comes with a 220 horsepower, 2-liter turbo, the traditional high-performance engine of the Saab cars. NEVS, formed partnerships with 400 suppliers needed for the sedan. In total, the restart of production engage around 2,400 companies globally through the suppliers.

The electric car based on the Saab 9-3 launches in 2014, with China as the first market. NEVS’ partner and part owner Qingdao has initially placed an order for a pilot fleet of 200 electric cars with delivery starting in spring 2014.

Sales of the 9-3 gasoline model in Sweden, via NEVS’ website, will start on Tuesday 10 December. The price is ~$43,290 (279,000 SEK) with manual transmission and $43,900 with automatic transmission. Additional specifications and delivery conditions are due at the start of sales.

“I am very proud of the dedication and the focus that NEVS management and employees have demonstrated over the year that has passed since we became owners of the plant in Trollhättan, and who have made ​​this possible. Swedish expertise along with Japanese technology around batteries and new lightweight materials and our Chinese group’s focus on green technology is our strength for the future,” said Kai Johan Jiang, NEVS founder and main owner.

Ken Zino is an auto industry veteran with global experience in print, broadcast and electronic media. He has auto testing, marketing, public relations and communications expertise garnered while working in Asia, Europe and the U.S.
View all posts by Ken Zino →
This entry was posted in manufacturing, new vehicle and tagged autoinformed, autoinformed.com, Ken Zino, nevs, qingdao, saab. Bookmark the permalink.