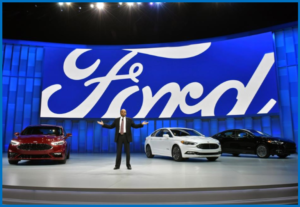 Soon to be fired Raj Nair, Ford Chief Technical Officer, and the new 2017 Fusion at 2016 NAIAS.

The safety defect could allow the driver to move the shift lever to Park and remove the ignition key, while the transmission may not be in Park, with no warning message or audible chime.

Ford will notify owners, and dealers will replace the shifter cable bushing, free of charge as is required by law. The recall is expected to begin July 30, 2018. Owners may contact Ford customer service at 1-866-436-7332. Ford’s number for this recall is 18S20. Note: Owners are directed to use the parking brake until the recall remedy repairs can be made.

Automobili Lamborghini is recalling 2015-2016 Lamborghini Aventador SV Coupe and Aventador SV Roadster vehicles. The bolts centering and supporting the brake discs to the wheel’s hub may loosen over time. Continued driving with loose centering bolts may result in the wheel detaching. Lamborghini will notify owners, and dealers will replace the centering bolts with ones that have thread-locking fluid, free of charge as is required by U.S. regulations. The recall is expected to begin August 31, 2018. Owners may contact Lamborghini customer service at 1-866-681-6276. Lamborghini’s number for this recall is L73XR0318.

Toyota Motor Engineering & Manufacturing (Toyota) is recalling certain 2007-2011 Lexus GS350 and GS450h, 2006-2013 Lexus IS350 and 2010-2014 Lexus IS350C vehicles, equipped with 3.5L V6 2GR-FSE gasoline engines. The diaphragms in the fuel pulsation dampers may harden over time and develop cracks, possibly causing a fuel leak. No problems were found in Japan on identical vehicles. Toyota thinks it is a U.S. fuel quality problem. Dealers will replace the fuel delivery pipe with a new pipe that has improved pulsation dampers, free of charge. The recall is expected to begin August 9, 2018. Owners may contact Lexus customer service at 1-800-255-3987. Toyota’s number for this recall is JLF.

Mazda North American Operations (Mazda) is recalling 2018 Mazda CX-5 vehicles. In the event of a side impact or rollover crash, the side curtain air bags may not properly unfold during deployment. As such, these vehicles fail to comply with the requirements of Federal Motor Vehicle Safety Standard (FMVSS) number 226, “Ejection Mitigation.” Mazda will notify owners, and dealers will replace the curtain air bags, free of charge. The recall is expected to begin in July 2018. Owners may contact Mazda customer service at 1-800-222-5500, Option 4. Mazda’s number for this recall is 2718F.

Volkswagen Group of America, Inc. (Volkswagen) is recalling 237,947 model year  2005-2008 Audi A4 Sedan, A4 Avant, S4 Avant and S4 Sedan, 2007-2008 RS4 Sedan, 2004 RS4 Cabriolet, 2007-2009 A4 Cabriolet and S4 Cabriolet, 2005-2011 A6 Sedan, 2006-2011 A6 Avant, and 2007-2011 S6 Sedan vehicles. These vehicles are equipped with certain air bag inflators assembled as part of the passenger frontal air bag modules used as original equipment or replacement equipment. In the event of a crash requiring deployment of the passenger frontal air bag, the inflators may explode due to propellant degradation occurring after long-term exposure to absolute humidity and temperature cycling.

Audi has notified owners, and dealers will replace the passenger frontal air bag with an alternate remedy  part (translation: Not Takata) free of charge. The recall began June 29, 2018. Owners may contact Audi customer service at 1-800-253-2834. Volkswagen’s number for this recall is 69R7. Note: This recall supersedes recalls 16V382, 17V032 and 18V004 and includes vehicles that may have had their air bag previously replaced under one of those campaigns.

Automakers might help solve the Post Office revenue problem with all the recall notices they are sending.

When an automaker or the National Highway Traffic Safety Administration (NHTSA ) concludes that a vehicle creates an unreasonable risk to safety or fails to meet minimum safety standards( often because of customer complaints), the manufacturer is required to fix that vehicle at no cost to the owner. This  can be done by repairing it, replacing it, offering a refund (for equipment) or, in some  cases, repurchasing the car.

What Should I do if my Vehicle is Recalled?

You should  get it fixed as soon as possible given the potential danger to you and your passengers if it is not addressed. You should receive a separate letter in the mail from the vehicle manufacturer, notifying you of the recall and explaining when the remedy will be available, whom to contact to repair your vehicle, and to remind you that the repair will be done at no charge to you. If you believe your vehicle is included in a recall, but you do not receive a letter in the mail from the vehicle manufacturer, please call NHTSA’s Vehicle Safety Hotline at 1-888-327-4236, or contact your vehicle manufacturer or dealership.