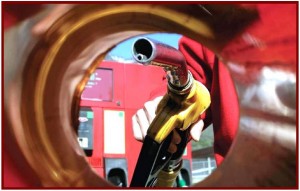 Gasoline prices are heading toward the $4 gallon levels last seen in the summer of 2008.

There’s no better example of how rising fuel prices have changed the auto industry than the ongoing shift in demand for more efficient engines. The trend led by customer demand is also reinforced strongly by the first government increase in Corporate Average Fuel Economy in decades, which finally prompted reluctant auto executives to invest in technologies that produce significant decreases in the amount of fuel needed per mile traveled.

Back in 2007 when gasoline temporarily sold at more than $3 a gallon on average before reverting  to $2.50, four-cylinder models represented 23% of Chevrolet retail sales in the United States, less than either V6 or V8 equipped models. So far this year, four-cylinder sales at 46% have doubled, outselling V6 and V8 engines.

Ironically this swing comes at a time when Congressional Republicans are trying to thwart continued regulatory progress on increased fuel economy and decreased CO2 emissions (they directly inversely correlate) after a compromise that benefited consumers, the auto industry and the economy was worked out by President Obama during 2009.

The National Fuel Efficiency Policy adopted in May of 2009 set uniform federal standards to regulate both fuel economy and greenhouse gas emissions while preserving the legal authorities of the Department of Transportation (DOT), the Environmental Protection Agency (EPA) and the State of California and 13 other States. It was supported by automakers, which were facing at least two sets of standards, if not more. 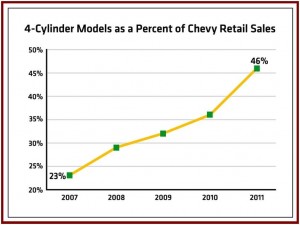 The fuel efficiency program covers new vehicle model years 2012 to 2016, and ultimately requires an average fuel economy standard of 35.5 mpg in 2016. And it is still in place. An estimated 1.8 billion barrels of oil will not be used by vehicles bought over the five-year life of the program — over an unspecified lifetime of each vehicle.

The fuel economy gains of more than 5% per year would have once been unthinkable in lobbyist-dominated Washington.

However with the ascent of a Republican majority in the House this year attempts to do the same thing beyond 2016 might be made illegal because of oil company, refinery and power industry lobbying. Sound familiar?  (See House Bill Says Greenhouse Gases not Air Pollutants. Republican Attack on EPA Despite Supreme Court Ruling)