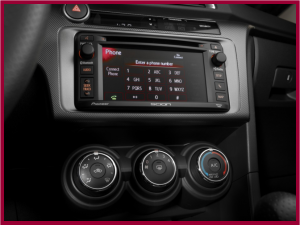 Automakers are increasing the ability for drivers to use phones, infotainment systems and web access in vehicles – the root cause of Distracted Driving deaths and injuries.

Toyota said today that the Scion touchscreen is the first non-luxury car brand to offer a touchscreen audio system as standard equipment across its entire 2014 lineup. The Scion brand is aimed at younger buyers who are the most likely to be involved in Distracted Driving accidents. New Scions will now come standard with the 6.1-inch LCD touchscreen. Included in the Scion touchscreen audio package is AM/FM/CD/HD Radio, hands-free phone capability, music streaming via Bluetooth wireless and AUX/USB port with iPodconnectivity. In addition, all 2013 xB models that begin production in August will also come standard with the new audio system.

In 2011, according to NHTSA data, more than 3,300 people were killed and 387,000 were injured in crashes involving a distracted driver. However, a new study from the National Safety Council (NSC) shows that these government statistics are deeply flawed, defy common sense and severely underestimate the extent of the deadly public health epidemic that is killing untold thousands and injuring millions more.

The latest NSC analysis comes as automakers are redoubling efforts to increase the use of phones, infotainment systems and web access in their vehicles – the root cause of the deaths and injuries.

“A standard touchscreen audio system across the entire Scion lineup stays true to the brand’s innovative nature and responsiveness to the desires of its youthful drivers,” Scion Vice President Doug Murtha said.