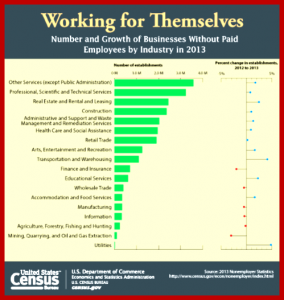 Most non-employer businesses grew in the number of establishments and receipts since 2012. This is bad news for U.S. workers.

These are part of a larger, ongoing problem caused by politicians as the Nation’s international trade deficit in goods and services increased to $41.9 billion in May from $40.7 billion in April. This means jobs are offshore, in spite of the ‘free trade’ rhetoric from politicians claiming this is good for us; Politicians who are owned by international big business interests who care not about the United States or its struggling middle class.

Most industry sectors with non-employer (meaning no employees) businesses experienced growth in the number of non-employer establishments and receipts since 2012, according to Non-employer Statistics: 2013, which includes data on businesses in nearly 450 industries located in metropolitan areas, counties, states and nationwide.

For example, the construction sector (NAICS 23) saw its first increase in number of non-employer establishments since 2007. The sector added 21,644 establishments between 2012 and 2013.

“Non-employer businesses run the gamut from old-fashioned family-run corner stores to home-based bloggers,” said William Bostic Jr., the Census Bureau’s associate director for economic programs. “In some cases, the business may be the owner’s primary source of income, such as with real estate agents and physicians, but in other instances, they may operate the business as a side job, such as with babysitting and tutoring.