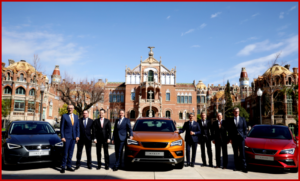 SEAT is the only company that designs, develops, manufactures and markets vehicles in Spain.

SEAT is a member of the Volkswagen Group, the multinational has its headquarters in Martorell (Barcelona), exporting 81% of its vehicles in over 80 countries through a network of 1,700 dealerships.

SEAT closed the year in the black for both indicators for the first time since 2007. SEAT’s profit after tax grew to €903 million because of the one-time effect of selling the subsidiary VW Finance, S.A. to Volkswagen AG. This operation is part of Volkswagen Group’s strategy to reorganize its financial subsidiaries under a single company, yielded SEAT a capital gain of €671 million. SEAT claims the sale enables the brand to improve its financial position after allocating €590 million to compensate losses from previous years.

“Higher levels of sales, higher mix and cost optimization lead us to profitability,” said SEAT Chairman Luca de Meo in Barcelona during the 2016 earnings call. “SEAT has become a solid company that moved clearly from recovery to a consolidation phase. And SEAT is now preparing itself for development,” and he noted that 2017 is a crucial year for SEAT with the Ibiza and the Arona.

SEAT’s 2016 turnover stood at €8,597 million 3.2% higher than the previous year, and the best revenue figure in its history. The driving forces behind this figure are growing sales and a better vehicle mix, as demonstrated by the commercial success of the Ateca, the Leon and the Alhambra, three models with a highest contribution margin.

The integration of the SEAT Technical Centre (CTS) into Volkswagen group, an operation that in theory enables a more efficient response to the technological challenges of the future, as well as the increased business obtained by SEAT Componentes, which in 2019 will manufacture the Volkswagen Group’s new MQ281 gearbox.

Seat will launch four new models from 2016 to 2017. This resulted in a record figure for total investments and expenses in R&D. SEAT allocated 47% more to these to reach €862 million, €276 million more than in 2015, to address, among other priorities the new MQB A0 platform, which SEAT will be the first in the Volkswagen Group to use to produce the fifth-generation Ibiza. This figure represents 10% of the company’s turnover. Since 2012, SEAT has invested €3 billion in R&D, equipment and facilities.

In 2016, SEAT also increased its capacity to generate profits through its core activity. The company improved its EBITDA (earnings before interest, tax, depreciation and amortization) by 25% to reach €489 million euros. As defined in the collective agreement signed in 2016, SEAT employees will receive a total of €6 million as a benefit for the achieved results.

This year SEAT will complete the biggest product offensive in its history with the sale of the fifth-generation Ibiza, which is going to reach dealers this summer, and the launch of the Arona, the brand’s new compact crossover and its first ever SUV in the world’s fastest growing segment, in the second half of 2017. Both models, produced in the Martorell factory, will join the Ateca, which was launched in 2016, and the Leon facelift, which has been on sale since last January.

The expansion and renewal of the range according to SEAT to increase its market coverage from 53% to 72% in Europe and give fresh impetus to sales, as well as lower the average age of the SEAT model line-up. In January and February of this year, SEAT’s worldwide deliveries saw a double-digit increase (+13.6%) to stand at a total of 64,000 vehicles. In addition, the brand is one of the fastest growing in Europe at the beginning of the year, with an increase of 20% in vehicle registrations.

One of the goals SEAT has set for itself is to become a benchmark in the industry in terms of connectivity and smart mobility. To achieve this, the company will inaugurate the Metropolis:Lab Barcelona in April, a 100% SEAT facility that will be integrated in the Volkswagen Group’s worldwide network of digital labs. The brand is also going to open a flagship store in the coming months in Barcelona to enhance its relationship with customers and with the city.

It is the only company that designs, develops, manufactures and markets cars in Spain. A member of the Volkswagen Group, the multinational has its headquarters in Martorell (Barcelona), exporting 81% of its vehicles. SEAT Group employs more than 14,500 professionals at its three production centers – Barcelona, El Prat de Llobregat and Martorell, where it manufactures the highly successful Ibiza and Leon. Additionally, the company produces the Ateca and the Toledo in the Czech Republic, the Alhambra in Portugal and the Mii in Slovakia.

*SEAT prepares its financial statements according to the Spanish General Accounting Plan, without including its subsidiaries. The Volkswagen Group applies international accounting standards (IAS/IFRS) and consolidates the SEAT brand figures.