September New Passenger Car Registrations Up in European Union, But Trend is Downward

During September 2019, EU demand for new passenger cars increased by 14.5% to reach 1.2 million units registered in total. To a large extent, according to the ACEA trade group, this strong year‐on‐year growth is the result of a low base of comparison, as registrations fell significantly in September 2018 (‐23.5%) following the introduction of WLTP testing when it was revealed that many diesel engine cars were dirtier than most – if not all – makers claimed.

During the first nine months of 2019, EU new car registrations were down 1.6% compared to the same period the year before. Despite demand recovering across the European Union in September, Germany (+2.5%) was the only major market to post positive results so far this year. Spain (‐7.4%) saw the strongest drop, followed by the United Kingdom (‐2.5%), Italy (‐1.6%) and France (‐1.3%). 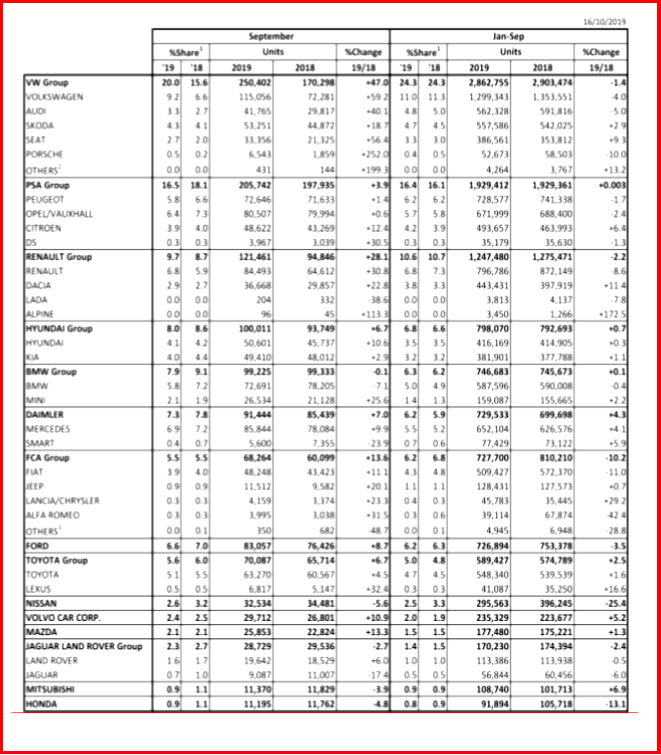 During September all EU member states posted increases, except for Bulgaria. Four of the five major EU markets recorded double‐digit gains: Germany – the epicenter of the diesel cheating – (+22.2%), Spain (+18.3%), France (+16.6%) and Italy (+13.4%). By contrast, in the United Kingdom market recovery was very limited (+1.3%), as Brexit‐related chaos continues to hurt consumer confidence.

Ken Zino is an auto industry veteran with global experience in print, broadcast and electronic media. He has auto testing, marketing, public relations and communications expertise garnered while working in Asia, Europe and the U.S.
View all posts by Kenneth Zino →
This entry was posted in economy, sales and tagged acea, auto industry commentary, autoinformed.com, Kenneth Zino. Bookmark the permalink.