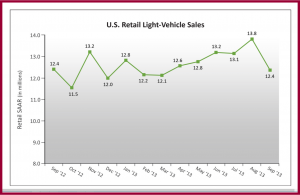 LMC Automotive is holding its 2013 forecast at 15.6 million for total light-vehicle sales.

Coming off several strong spring and summer months, as well as a good year to date, the pace of U.S. auto sales is slowing to the same level as September 2012, according to the latest monthly forecast. Compared to a robust seasonally adjusted annualized rate of more than 16 million units in August, September is running at a 15.2 million SAAR. Leaving fleet sales aside, the retail SAAR in September is expected to be 12.4 million or 933,400 cars and trucks.

While a total September sales forecast of 1,132,800, if accurate, represents a mere 2% increase from September 2012, a calendar issue with Labor Day has negatively biased the month. The auto industry reports sales on a sales month basis rather than a calendar month basis. Historically, Labor Day falls in the September sales month. Not in 2013 though, it fell in the August sales month. This means that sales delivered over the holiday weekend were counted in August sales rather than September. (Asian Brands Dominate U.S. August Sales and Chrysler, Ford, GM Post Double Digit August Sales Gains)

“Although the year-over-year sales gain in September is smaller than has been observed in recent months, it’s important to recognize that September reported sales are being heavily influenced by a quirk on the industry sales calendar,” said John Humphrey, at J.D. Power, the source of the sales soothsaying.

He said that due to this difference in the sales reporting calendar in 2013, it makes sense to evaluate August and September sales in combination.

Higher fleet sales compared to August are also a factor that will hurt automaker profits. Fleet share is projected at 18%, up from 11% in August at close 200,000 units for what are lower margin deals. At the current pace, though, fleet sales should account for less than 18% of the market in 2013. This a healthy improvement for much higher fleet rates in recent years, particularly at Chrysler, Ford and GM.

LMC’s forecast for 2013 North American production holds at 16.0 million units, a 4% increase from 2012. Looking ahead, its 2014 production forecast is currently at 16.5 million units, up 3% from 2013. Volume is expected to increase from a higher level of demand, and from the introduction of new vehicles, including the BMW X4, Ford Transit, Honda Fit, Mazda3 and Mercedes-Benz C-Class. In addition, 28 redesigned models are expected to come to market in 2014, up from nine in 2013.

Ken Zino is an auto industry veteran with global experience in print, broadcast and electronic media. He has auto testing, marketing, public relations and communications expertise garnered while working in Asia, Europe and the U.S.
View all posts by Kenneth Zino →
This entry was posted in auto news and tagged autoinformed, autoinformed.com, j.d power, Ken Zino, lmc, u.s. sales. Bookmark the permalink.