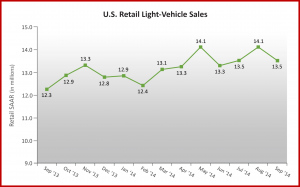 The sales of new light-vehicles are projected to increase by 6% to 1 million in September compared to last year, continuing the strong momentum of August. The retail seasonally adjusted annualized rate, aka SAAR, in September is expected to be 13.5 million units—which is 1.2 million units more than in September 2013—marking the seventh consecutive month in which the SAAR has exceeded 13 million units.

“Vehicle sales typically fall sharply immediately following the Labor Day holiday before recovering later in the month, but the decline this September has been smaller than in prior years,” said John Humphrey at J.D. Power, the source of the forecast.

While the growth is good news for the ailing U.S. economy, it is bad news for consumers since transaction prices in September averaged $30,100, the highest ever for the month and exceeding September 2013 by nearly $450. J.D. Power predicts that consumer spending on new vehicles – retail sales multiplied by the average transaction price – will exceed $30 billion in September, the highest level for the month of September since 2004. Retail transactions are the most accurate measure of the actual underlying consumer demand for new vehicles since they don’t include heavily discounted fleet sales.