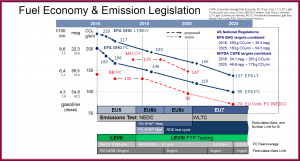 Estimates for the cost of compliance ranged from zero to $10,000 per vehicle for what is a difficult engineering task. The higher estimates – industry driven – never materialized. Click to Enlarge.

In January under the Obama administration,  the EPA finalized its proposed decision on fuel efficiency standards, originally set in 2012. The decision kept the fuel economy goals at their current level through year 2025. This decision came after a technical assessment report, a 30-day comment period, a proposed decision, and a second 30-day comment period. The Sierra Club and allies submitted more than 400,000 comments in support of the standards. Critics claim that the review was conducted too hastily.

“Today’s strong federal clean vehicle and fuel economy standards have sparked innovation and investment while reducing pollution in the air we breathe, and any attempt by the Trump Administration to roll back these crucial policies would be a massive step backward for Michigan families and for the health of our environment,” Berkowitz concluded.

More of AutoInformed on CAFE