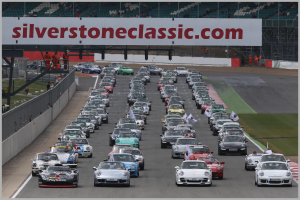 It is estimated that more than 8,000 classic cars were parked in a decidedly busy Silverstone infield. Aston Martin marked its centenary as ‘featured marque’ on Saturday.

The 2013 Silverstone Classic has claims to the world’s biggest classic motor racing festival now that the results are in. The three-day show this past weekend in the UK said that its attendance of 90,000, up from 83,500 in 2012 was a record. The 24 vintage races with 1,113 historic racing cars covering nine decades of motorsports competition, also a new world record.

Ironically, the German brand Porsche – arguably – stole the show on Sunday with a parade marking 50 years of the 911. Hosted by the Porsche Club GB, a world record 1,208 911 models were on the track. The convoy was led by five-time Le Mans winner Derek Bell together with Mark Porsche, son of Ferdinand ‘Butzi’ Porsche, designer of the original 911 that was first unveiled in 1963. (Read AutoInformed on Milestones – 50 Years of the Porsche 911)

It is estimated that more than 8,000 classic cars were parked in a decidedly busy Silverstone infield. Aston Martin marked its centenary as ‘featured marque’ on Saturday, while the UK’s largest gathering of Lamborghinis – more than 80 – celebrated the Italian supercar company’s 50th birthday.

The racing attracted a number of top drivers from past and present generations. Former F1 driver and Le Mans winner Jackie Oliver proved he has lost none of his competitive spirit by winning the prestigious Royal Automobile Club Tourist Trophy for Historic Cars in a Ferrari 250 SWB he shared with Gary Pearson. Andy Priaulx – a three time FIA World Touring Car Champion – was among the pacesetters in the Sir John Whitmore Trophy for under 2-Liter Touring Cars in his 1965 BMW 1800 Ti. Rob Huff, the reigning World Touring Car Champion, drifted his little Mini to an impressive class victory among a field of V8-powered American muscle cars in the Trans-Atlantic Touring Car Trophy race.

Another highlight saw the 1992 British Touring Car Champion Tim Harvey leading the Super Touring Car Trophy in the flame-spitting Labbatt’s liveried Ford Sierra Cosworth that he last raced in 1990. In the end, Harvey settled for second behind the more modern Vauxhall Cavalier of current BTCC star Frank Wrathall. TV presenter Tiff Needell was among those setting a new standard in the Formula Ford field, while Steve Soper made a comeback behind the wheel of a Ford GT40.

Among the record crowd enjoying the spectacle were the Duke of Kent, three-time world champion Sir Jackie Stewart and veteran commentator Murray Walker, making his first public appearance since a recent illness.

A number of motor sport personalities also attended a BRDC Silverstone Classic dinner honoring the 50th anniversary of Jim Clark’s first world championship. As well as speeches from several of the legendary racer’s ex-team-mates, the Jim Clark Trust displayed a large collection of trophies, seen outside Scotland for the first time since Clark’s death in 1968.