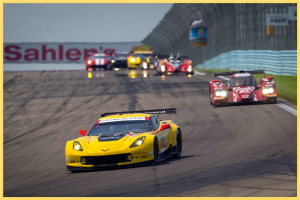 Corvette Racing has been formidable during the summer months.

The new Corvette C7.R on Sunday took a third straight victory in the Sahlen’s Six Hours of The Glen at Watkins Glen International. Antonio Garcia held off the No. 91 Dodge Viper SRT GTS-R of Marc Goossens on a last-lap restart in the win, joining co-driver Jan Magnussen in victory lane. The two also led at the halfway mark to score maximum points en route to a Round 3 victory in the Tequila Patrón North American Endurance Cup. The two-car Porsche 911 RSR factory effort, Porsche North America, finished fifth and eighth in the GTLM class.The No. 56 BMW Z4 GTLM of John Edwards and Dirk Müller finished sixth, with a relatively trouble-free race only marred by Edwards having to take evasive action due to a spinning competitor during the second hour and dropping from third to ninth.

“We’re developing a new car and we keep finding new things to do with it. I just saw that all the fastest race laps for all the GTLMs were all within three tenths (of a second). It is a very competitive category.

You have to be on your best game for everything you do. There is no room for any mistakes,” said Magnussen, who picked up his 40th win in North American professional sports car racing.

The team finished second to Ferrari in GTE Pro at the 24 Hours of Le Mans two weeks ago with Magnussen, Garcia and Jordan Taylor, after the Aston Martins broke.

Ken Zino is an auto industry veteran with global experience in print, broadcast and electronic media. He has auto testing, marketing, public relations and communications expertise garnered while working in Asia, Europe and the U.S.
View all posts by Kenneth Zino →
This entry was posted in racing and tagged Antonio Garcia, autoinformed, autoinformed.com, Jan Magnussen, Ken Zino. Bookmark the permalink.