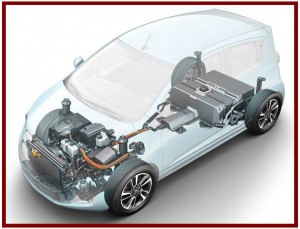 Spark will be the first pure electric vehicle from GM since the ill-fated EV1 that appeared in the last century when California was mandating that EVs make up 10% of the U.S.’s largest car market. It never happened, and it cost automakers billions of dollars. Now California is mandating EVs once again.

Chevrolet will unveil the electric version of the Spark minicar at the Los Angeles Auto Show later this month. Few details for the pure EV are known, but Spark’s lithium ion battery pack is rated at 20 kWh. A permanent magnet motor will offer at least 100 kW (130 horsepower) of power and instantaneous torque of 400 lb.-ft. In theory this means zero-to-60 mph acceleration time of  less than eight seconds is possible. However, the real Spark numbers that matter – price and range – are still mysteries.

The current EV mileage champion is the much larger 2012 CODA, a five-passenger compact sedan with good rear seating and trunk space. The Coda with a bigger. more expensive 31kWh lithium ion battery-pack is rated at a combined range of 88 miles per charge. Depending on your driving habits and the climate, the Coda can be driven up to 125 miles on a single charge in what is said to be nearly four times the average daily U.S. commute. Test drives by AutoInformed show that the mileage claims are credible. Moreover, if the Coda is driven with care, they are conservative. The Mitsubishi-based sedan in the federally mandated laboratory test that simulates city driving (the LA4 city cycle or Urban Dynamometer Driving Schedule) provides a range of 133.6 miles city and 116.1 miles highway.

The South Korean-made Spark EV will be sold in tiny quantities in some U.S. and global markets, starting in late 2013 in California with the help of U.S. taxpayer subsidies. It’s estimated 75% of the propulsion system components are from the Volt and GM’s hybrid truck programs, but that’s only small portion of the total value chain.

General Motors needs the CAFE credits from the Spark EV and its gasoline versions to meet impending fuel economy requirements in the U.S. The Spark is now powered by a 1.2-liter four-cylinder engine that delivers 83 horsepower, and is rated at 32 mpg combined EPA mileage for the four-speed automatic version. (DOT and EPA Issue Record 54.5 MPG Fuel Economy Standards)

Lavish federal and California taxpayer subsidies – as well as access to coveted HOV – or high occupancy vehicle lanes – for politically favored EVs are bolstering sales of what remain mostly unsalable electric vehicles, in the views of their many critics. While existing buyers of electric vehicles are true EV believers, the vast majority of car shoppers are not. In a new study, nearly half of EV owners claim the best benefit of their ac/dc wheels is lower emissions when compared with emissions from gasoline- or diesel-powered vehicles, and it’s not clear if they know how their electricity is generated.

However these people comprise only about 2.5% of the U.S. new vehicle market of more than 14 million – and that is only if you include hybrids as EVs; pure EVs have less than a 1% market share. Therefore, for EVs to be successful other people need to be brought into the tiny clan. (Green Talk from EV Makers Ignores Key Buyer Concern – Cost)

One policy “idea” or market intervention kicking around Democratic circles is an Obama Administration proposal to convert the existing $7,500 federal tax credit to a $7,500 dealership rebate, thereby taking the vagaries out of a future tax return and converting it to the time honored automaker marketing technique of cash on the hood. The only difference is that taxpayer-supplied cash is something in rather short supply right now. (See U.S. Budget Deficit Officially at $1.299 Trillion in FY 2011) 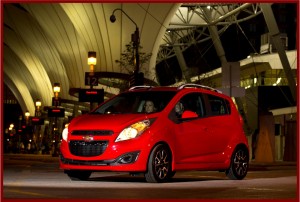 Spark is a tiny five-door, four-passenger hatch that has been on sale in Europe, Korea, India, Mexico, South America and Australia three years where mini cars are more saleable, both thus far and historically. (Spark has sold more than 600,000 vehicles globally.) Spark came to the U.S. earlier this year as a 2013 model, and 8,400 have now been sold. In comparably sized mini-cars, there is only the Fiat 500 (36,000 ytd), which is four inches shorter, and the Scion IQ (7,700). Here the Spark is a good value, since it starts at under $14,000, which is thousands less than the imported from Japan Scion or the Mexican built Fiat.

The Honda Fit EV now on sale in California has a 20-kWh lithium-ion battery that provides the capacity to earn an EPA combined city/highway estimated driving range of 82 miles. This means the Fit EV – on paper and in press releases – surpasses the EPA efficiency and range ratings of the Ford Focus Electric (105 MPGe, 76-mile range), Nissan Leaf (99 MPGe, 73-mile range), and Mitsubishi I (112 MPGe, 62-mile range). Honda recently settled a class action lawsuit that said in effect that it had overrated the mileage on the Civic hybrid.