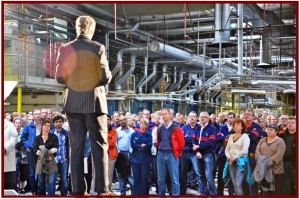 The crucial part of the case revolves around the intellectual property rights that GM retained for Saab’s latest vehicles as well as how long GM was required to supply vehicles and components to Saab.

In what could be viewed as the legal equivalent of a Hail Mary pass, Dutch automaker Spyker filed suit against GM in Detroit yesterday, alleging that GM forced the Swedish brand Saab into bankruptcy and then blocked the sale of the company to Chinese investors Zhejiang Youngman, which would have ensured its survival.

Spyker Chief Executive Officer Victor Muller told reporters on a conference call that $3 billion in damages is what Saab would be worth if the deal had gone through.

Spyker purchased Saab in 2010 from GM for $74 million in cash and $326 million in preferred shares, which GM immediately wrote off. Spyker is financing the litigation, which could cost millions, through a third party in return for a “very substantial share” of the proceeds.

Spyker was unable to keep the company going as sales dwindled and losses mounted, and stopped making cars in the spring of 2011. The Swedish government began paying workers that summer, and Saab eventually filed for bankruptcy in December of 2011 after a failed series of financial maneuvers and proposed deals.

“Ever since we were forced to file for Saab Automobile’s bankruptcy in December of last year, we have worked relentlessly on the preparation for this lawsuit which seeks to compensate Spyker and Saab for the massive damages we have incurred as a result of GM’s unlawful actions,” said Victor R. Muller, Spyker’s Chief Executive Officer.

A GM spokesperson dismissed the suit as “without merit” and said the company would answer in court if need be by “vigorously defending” itself against “baseless charges.”In GM’s view the clock had run out on the Saab game.

Nevertheless, the  crucial parts of the case revolve around the intellectual property rights that GM retained for Saab’s latest vehicles when it sold the loss making Swedish automaker, as well as how long GM was required to supply vehicles and components to Saab no matter its new ownership planned to do. GM is scheduled to respond to the suit by August 28, if it doesn’t ask for an extension in litigation that could drag on for years.

In 1990, Saab Automobile AB was created as a separate company, jointly owned by the Saab Scania Group and General Motors, and became a wholly owned GM subsidiary in 2000. GM was unable to make a profit with the company and subsequently sold it to Spyker in 2010 after GM emerged from its own bankruptcy.

When Saab declared bankruptcy, General Motors was a preferred shareholder with outstanding receivables of about $100 million that were written off. At the time  GM reiterated a long-standing position against Saab being able to transfer GM intellectual property competing automakers or having Chinese companies build the GM developed 9-5 sedan to compete against GM in China. GM also had no interest in continuing to supply a Mexican-built re-badged Cadillac SRX as a Saab in China or elsewhere. GM is the largest automaker in China, albeit with communist government dictated partners.

Some of Saab still survives in the form of National Electric Vehicle Sweden AB (NEVS), a new firm established to purchase part of the assets of Saab Automobile AB, Saab Automobile Powertrain AB and Saab Automobile Tools AB. The selling price was not disclosed when the deal went through last June.

The company will establish a new automobile venture in Trollhättan, dedicated to the development and manufacturing of electric vehicles (EVs). The intellectual property rights for the aging 9-3, introduced in 1992, were part of a deal that includes all outstanding shares in the company that owns the Saab Automobile facilities in Trollhättan, Sweden.

In parallel with EV conversion of the Saab 9-3, an all-new model is promised, based on technology from Japan. Marketing and sales will be global, with an initial focus on China, projected to be the largest and most important EV market. Development will be conducted between Swedish, Japanese and Chinese engineers.

Saab Automobile Parts, as well as intellectual property rights for the much newer Saab 9-5 and 9-4X models, owned by General Motors, were not included in the NEVS purchase agreement. GM has been consistent in saying those models are not for sale under any circumstances. Neither is the brand name Saab part of that deal.