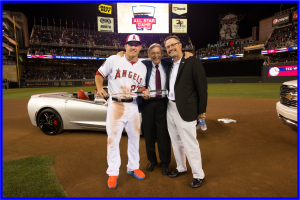 Mike Trout of the Los Angeles Angels – the Ted Williams MVP in last night’s all star game whose hit provided the first run (RBI triple) – picked a Corvette Stingray over a Silverado pick-up as his reward for outstanding play in the inter-league game that has been going on since 1933. Chevrolet sponsors the award.

Detroit Cy Young Award winner Max Scherzer got the win – rare in an All Star Game, given all the pitching changes – in a 5-3 American league victory that gives the AL home field advantage in the World Series this fall, when this writer opines the Tigers will take on the Dodgers.

The action packed bout – surrounded by too much marketing hype, special promos and just plain commercial silliness that went on too long, including egomaniac TV announcer Joe Buck being asked out of the AL locker room just before the game was going to start by NYY #2, aka the Captain, proved how badly the 162 game season has been damaged by, on average 3 to 4 hour matches where pitching dominates.

Not so last night.

The best pitchers in both leagues were aggressive and efficient, but so were the best hitters – often going after first throws from hurlers many of whom they had never seen before. It also seemed that stepping out of the box and batting glove pawing was minimized as well. Plenty of balls were hit hard (Tiger Miguel Cabrera’s howitzer home run to left center, Chase Utley’s wall cracking high hard double as just a couple of examples).

Better still, the batters, fielders and runners did not argue close calls or narrow escapes adjudged by the umpires. Even though the game-slowing replay review was available for the first time this year, neither manager used it. Not once.

Somebody had to lose the All Star Game,  a 15-hit, 1 error contest. However, add superb defense on the field – (Jeter’s full extension while knocking down a line drive and almost getting the runner), aggressive base stealing on the paths (Dodgers Dee Gordon scoring from 2b on a hard hit ball), and, yes, the best ‘let’s get nasty’ relievers in the business that kept the final 4 innings scoreless, and viewers were given a straight whiskey taste of what the game once was, and can be again.

Put the ball in play, keep the betters in the box, minimize timeouts, enforce the pitching delay rule – in short ‘Play Ball.’

Ken Zino is an auto industry veteran with global experience in print, broadcast and electronic media. He has auto testing, marketing, public relations and communications expertise garnered while working in Asia, Europe and the U.S.
View all posts by Ken Zino →
This entry was posted in awards, marketing, results and tagged autoinformed, autoinformed.com, Ken Zino, mlb. Bookmark the permalink.