An all-new Mustang Shelby GT500 with a +700-plus horsepower supercharged V8 will be the most powerful street-legal production Ford ever. The Mustang is said to be legal on roadways and race tracks, with claimed “new innovative track technologies, performance hardware, plus aggressive and functional track-tuned styling.” The Shelby GT500 fast-back coupe will be twice as powerful as the original 1967 Mustang performance model. More details closer to production in this version of an automotive news striptease – be patient and just enjoy what’s coming off. 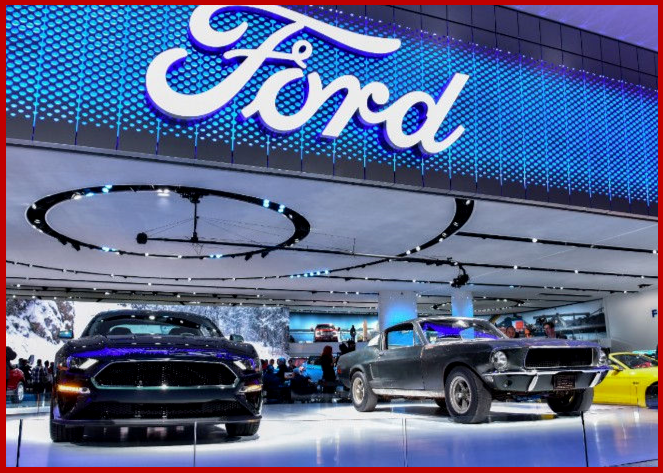 2019 Mustang Bullitt with the original 1968 GT that played second to Steve McQueen.

In an effort – we bet wildly successful – to milk every dollar out of the current aging Mustang GT, a special Edition due this summer – is a Bullitt equipped with a manual transmission. The manual gear shifter has a white cue ball shift knob like the movie star – if you must ask, skip this car -used in the movie car. The Bullitt has all Mustang GT Premium and Performance Package content standard.

An active valve performance exhaust system is standard with new Black NitroPlate exhaust tips that is re-tuned to give the car a “signature burble,” as well as a new Open-Air Induction System and a Shelby GT350 intake manifold with 87mm throttle bodies and a powertrain control module calibration for – what else would Ford say – “optimal performance.”

Third-generation member of the McQueen family, Molly, starred in a special movie of her own introducing the new third-generation Bullitt at the North American International Auto Show. She never knew her grandfather and choked on one of her stage lines. In the film, Molly races (we’re more than skeptical about this being her) a Bullitt through a parking structure battling a Dodge Charger for the final free space.

Helping it win that spot – aside from Ford’s production money – was the Bullitt’s upgraded 5.0-liter V8 engine that will deliver at least 475 horsepower and 420 lb.-ft. of torque, giving it’s claimed the new Bullitt to a top speed of 163 mph – an 8 mph increase versus the latest Mustang GT.

Other standard equipment includes a heated leather steering wheel and a 12-inch all-digital LCD instrument cluster, identical in function to the cluster introduced on 2018 Mustang, but with a unique Bullitt welcome screen that starts in green with an image of the car rather than the pony.